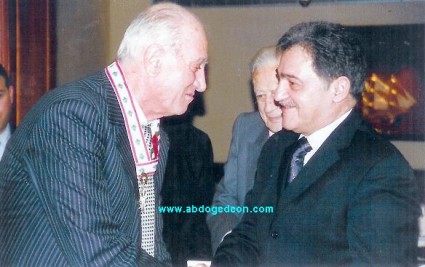 After Mark posted about news of Lebanon in old magazines, i remembered a post i have been wanting to publish for a while. It’s about my old school’s supervisor who died one year and one month ago and who was one of Lebanon’s legends in sports.

Chawki Rababi was a professional athlete in the 1950s and 1960s and was a member of the Lebanese volleyball team. He won the Luxembourg games in 1952 with the Lebanese team and coached the national team later on for two years. While searching his name, i found surprisingly a few old and recent pictures about him on Abdo Gedeon’s website.

Of course we mostly loved him back in school for being very kind and forgiving when we were kicked out of the class, but he truly was a great guy. He used to give us advice and tell us stories about his glory days.

My only regret is that i never managed to visit him since 2005 as things just got busy and time flew by.