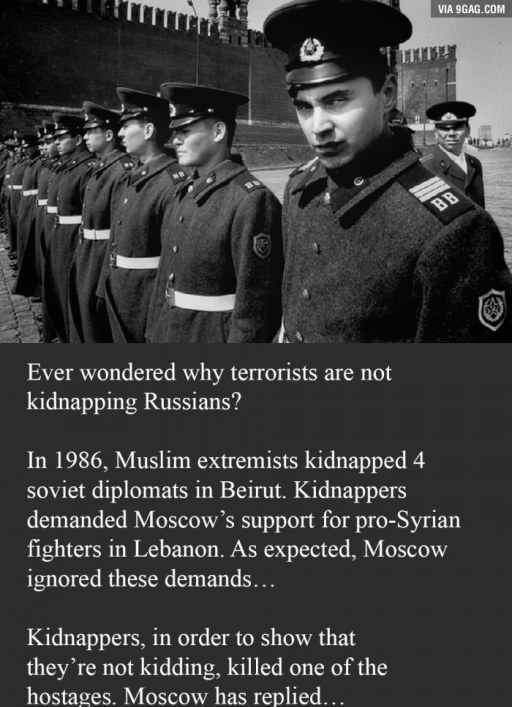 A friend was showing me a post on 9gag about kidnapped Soviets in Beirut and how Russia’s counter-terrorism Alpha Group handled the situation. I’ve read a lot about kidnappings, specially from the PLO, in the 1980s but I’ve never heard this part of the story.

Here’s what happened:
Four Soviet diplomats were kidnapped in September 1985 by a fundamentalist group called the Islamic Liberation Organization. Russia quickly dispatched its Alpha group, tasked with counter-terrorism hostage-rescue operations, to Beirut. Once the team learned that Arkady Katkov, a consular attaché and one of the four hostages, was killed, they responded quickly by tracking down and locating one of the kidnappers’ leaders (or relative it’s not clear). In order to send a clear message to the terrorists, Alpha group members castrated the hostage, cut him down into pieces and sent him to the hostage takers. They also threatened to kill more of the kidnappers’ relatives if the Soviet diplomats were not free.

As a result, the 3 hostages were released and dropped off near the Soviet Embassy and no Russian officials were ever taken captive since then. Some say that the release of the Soviet hostages was the result of extensive diplomatic negotiations with the spiritual leader of Hezbollah, Grand Ayatollah Mohammad Hussein Fadlallah.

It’s not surprising to see the Russians react that way to hostage situations specially after what they’ve done during the Moscow theater and the Beslan school hostage crisis.

Speaking of hostages, would you support approaches similar to the Russian one to free our kidnapped soldiers?