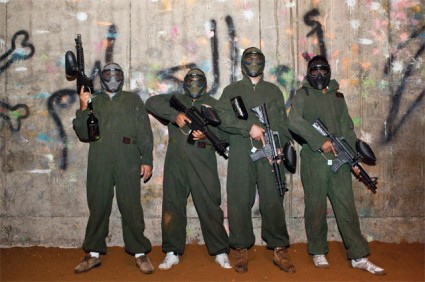 If that’s not some cool PaintBalling, I don’t know what is. I played once with a group of guys who had their own suits, masks and even walkie talkies. And for the record, it’s not just with Hezbollah guys but with every Lebanese who’s been at some point engaged in a militia. I was told once by a friend about an ex-Lebanese Forces Special Units member (an expat now) who beat 4 foreign army men in a paintball game all by himself.

I wish they’d told us what’s the name and exact location of that paintball place. All they mention is that it took place ‘in a grungy, bunker-like basement underneath a Beirut strip mall”.

As my eyesight returns and readjusts to the dim arena light, I poke out from my position behind a low cinder-block wall. Two large men in green jumpsuits are bearing down on me. I have them right in my sights, but they seem unfazedâ€”even as I open fire from close range, peppering each with several clear, obvious hits. I expect them to freeze, maybe even acknowledge that this softie American journalist handily overcame their flash-bang trickery and knocked them out of the game. Perhaps theyâ€™ll even smile and pat me on the back as they walk off the playing field in a display of good sportsmanship (after cheating, of course).

Instead, they shoot me three times, point-blank, right in the groin. [Link] 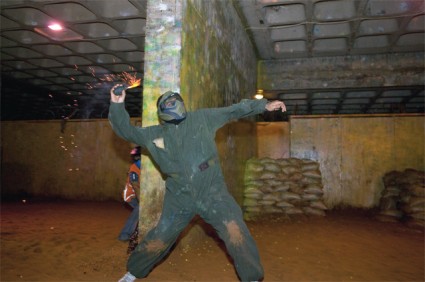