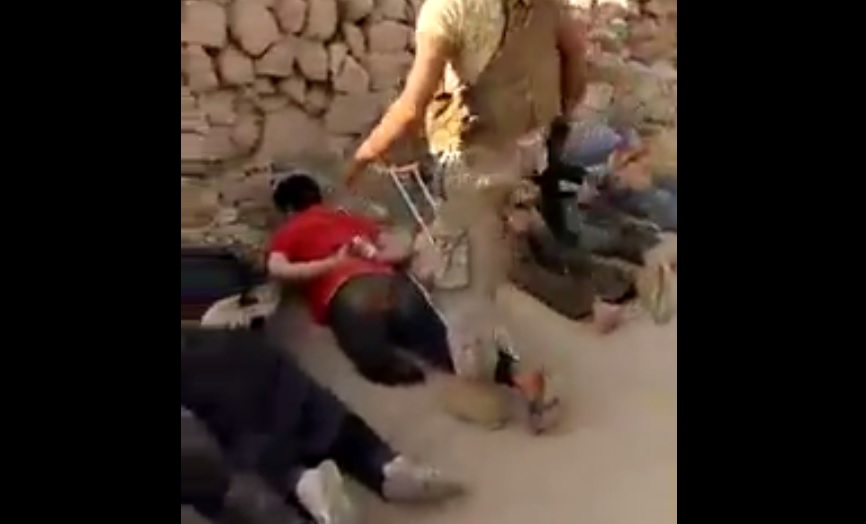 A soldier hurting a man who is missing the lower part of his right leg.

I shared and criticized the video being spread on Facebook not because I care about these terrorists, but because the Lebanese troops should not be filming and sharing such videos, and definitely not committing any of these acts. I wouldn’t mind them bombing the hell out of these criminals but treating a prisoner (with one leg) can only harm the army’s image and won’t do anyone any good.

In all cases, I am glad and proud that the Lebanese Army described the incident as an isolated one and that they will hold responsible every soldier carrying out acts of this kind. Speaking of Arsal, I strongly believe the army should wipe these scumbags all out and don’t stop before the mission is complete. There’s no point of negotiating with these groups and time is on their side not ours.

Things have been heating up for months at the outskirts of Arsal and Qaa – Mashari’ on the Lebanese-Syrian border. Qaa residents have already been taking turns in watching over and guarding the area. The first spark was when a group of residents were attacked by armed terrorists on February 1st, 2014. Several residents were forced out of their houses and were assaulted, leaving some of them severely injured. News spread about a man named Joseph Chahoud who gave them money so they would spare his life after having tried to stand up to them but they beat him up and left him severely injured. Another story emerged about an elderly couple (I couldn’t get their names) who tried to resist the assailants but were also beaten up and kicked out of their house. I hope the authorities are looking into all the incidents and taking care of the victims

PS: Why weren’t the billions donated to the Lebanese Army approved yet by our government?