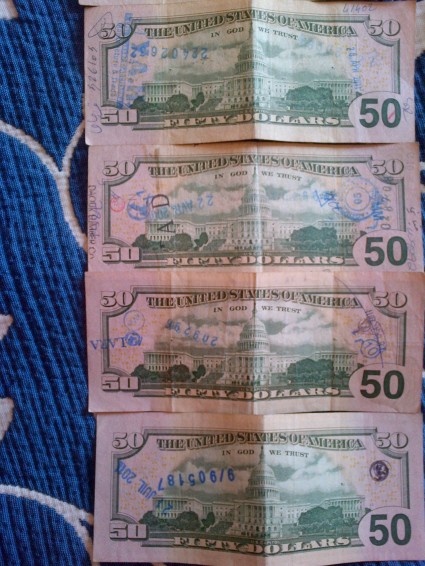 Stamping money is a very Lebanese thing. Some companies use invisible ink, others stamp and sign the bills. Most people hold up the bills against the light, some scratch them. I never understood scratching; I understand that there are different textures to a bill, but scratching it with your nail? What the hell does that show you??

Have you ever tried exchanging a stamped 100$ bill abroad? Not easy to get rid of!

This reminds me of a story that has nothing to do with this topic. A couple of years ago I got back a counterfeit 10,000LL bill from a restaurant. I only realized it when I got back home. The janitor of our building told me that he’d take it and that he knew how to spend it without getting caught. Since going back to the restaurant and arguing with no proof was gonna be a complete waste of time, I decided to cut my losses, and hand him the bill. It cost me a 135$ to bail him out of jail… He tried spending the money in a mini market. The owner beat the living crap out of him and THEN called the police, who also knocked some sense into him (literally, I think the cop’s fist was called “sense”)