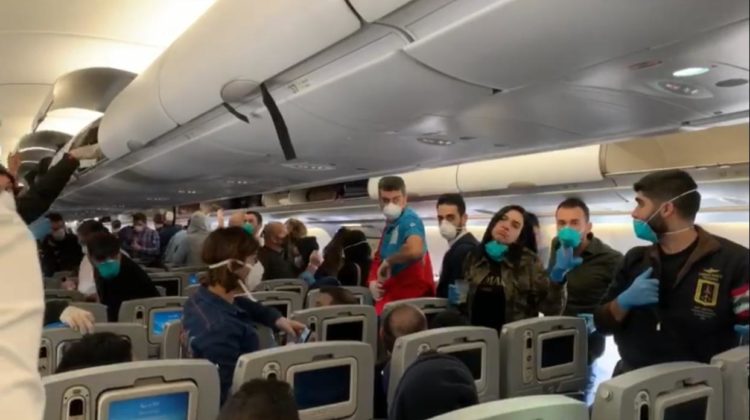 A video was circulating earlier today showing a brawl on the Mea flight coming from Riyadh. First rumors spread that some passengers were removing their masks and jokingly coughing at others but that’s not true. What happened was that LBCI was on board and wanted to shoot a short video on the precautions being taken in order to include it in LBCI’s awareness campaign against the virus.

LBCI stated on their website that a passenger demanded not to appear in the video, and after they made it clear the video won’t show her or others personally, a number of passengers attacked them forcing the security forces to intervene.

However, if you look at the videos, the passenger is making it clear she doesn’t want to show in the video, to which the camera man arrogantly replied that he’s not filming her (but video shows he was) and then told her to sit down. If passengers didn’t give their consent ahead of time that they’re willing to take part in an awareness video, then it’s their right to object. This should have been MEA’s responsibility to inform passengers about LBCI shooting onboard.

Today’s flight was the last one coming from Riyadh due to the coronavirus outbreak. Follow the MEA FB page for updates on flight schedules and cancellations.