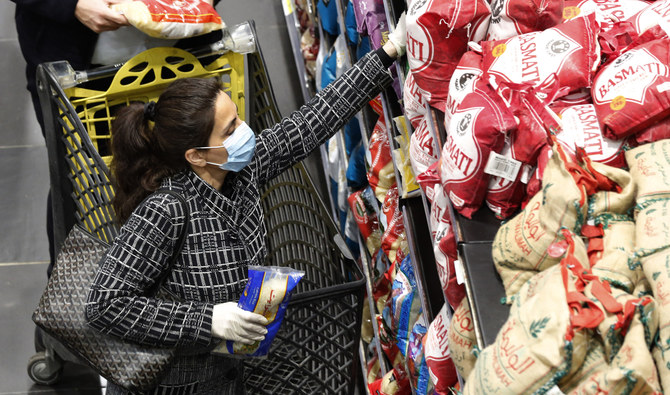 A woman wears a mask and gloves, as she shops at a supermarket as people begin to stock up on provisions, in Beirut, Lebanon, Wednesday, March 11, 2020. Health Ministry officials say there are more confirmed cases of the coronavirus in Lebanon. The vast majority of people recover from this virus. (AP Photo/Hussein Malla)

Prices have gone up by almost 80% in the past few weeks and almost 75% of Lebanon will be needing aid after the COVID-19 pandemic. The numbers are scary, poverty is on the rise, unemployment is soaring, thousands of businesses are shutting down and on top of all that, the Lira is depreciating at an accelerating rate, thereby severely impacting the purchasing power of Lebanese.

Why are prices soaring?

First things first, prices of the majority of goods are increasing because 80% of our food supply is imported, and even locally produced products rely on imported raw materials. This being said and since we need dollars to import goods and raw material, that neither banks nor BDL are providing, businesses have to take whatever Lebanese Liras they earn daily and buy dollars at market rate (around 4,300 today).

1- BDL/Banks/Government trio:
These three parties go hand in hand, even though the biggest blame has to be on all governments and ruling bodies for the past decade for failing to manage the economy and stop corruption. BDL comes next for contributing to this collapse with its highly suspicious financial engineerings and then banks for playing along and jeopardizing people’s deposits for selfish and political interests.

2- Currency Exchange offices:
It’s easier to call them mafia and they’re playing a very dirty game ever since the crisis started. Even worse, most of them are controlled by a couple of well known political sides and are being used as a bargaining tool to pressure banks, but in reality, people are paying the price.

3- Illegal & unregulated businesses:
If you’re wondering why the customs scandals are never settled, it’s because they’re costing us over a 1 billion dollars in losses according to some studies, and those benefitting from smuggling products and goods are disrupting the market and forcing legit businesses to compete at a huge disadvantage.

4- Greedy businesses: This is expected in such a situation and the Economy Ministry has proven useless so far in controlling prices. Luckily, social media is helping here in exposing such businesses but it’s also harming others by spreading rumors and sharing misleading information.

5- Illegal trade & money Transfers: Ever since the October revolution begun, it was pointed out that dollars & fuel are getting out of Lebanon in massive numbers, yet no one knows how and where. This has been a hot topic in recent weeks, but nothing will ever change before we have an independent judiciary committee.

Prices will keep going up and a lot of goods will soon disappear from the shelves if there’s no dollar supply. Let’s just hope it doesn’t get as bad as it did in Venezuela.