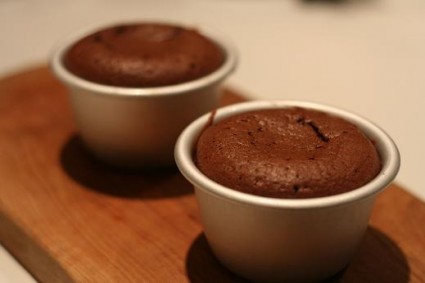 I was invited to an iftar last week in a Lebanese restaurant called Basma, opened next to La Cigale in Charles Malek Avenue in Achrafieh. The Iftar was a bloggers’ meeting organized by Leo Burnett (Thanks Michael for the invitation) and i had the chance to meet up briefly with some Lebanese bloggers. I was in a rush so i barely stayed for 20 minutes and did not taste the food even though it looked delicious.

I went back yesterday again to Basma to have a taste of what i missed. I was with a friend and we ordered their special fattoush that comes with goat cheese and sesame bread, hommos, grilled cheese rolls, wings and a mixed grill. The food was OK but nothing special to be honest, but then we decided to order dessert and even though i was hesitant at first, i ended up ordering one of their specialities, Riz bi Haleeb with burned sugar and what a great delight my dessert turned out to be!

The desserts were succulent and worth every penny. The chocolate fondant my friend ordered was amazing and had some cinnamon on it, mine had burned sugar on top of the Riz bi Haleeb and some dried fruits. They also had Ismalieh with ice cream instead of Achta.

In all, i would definitly come back for lunch or dinner, specially when i am in the mood for a good dessert.