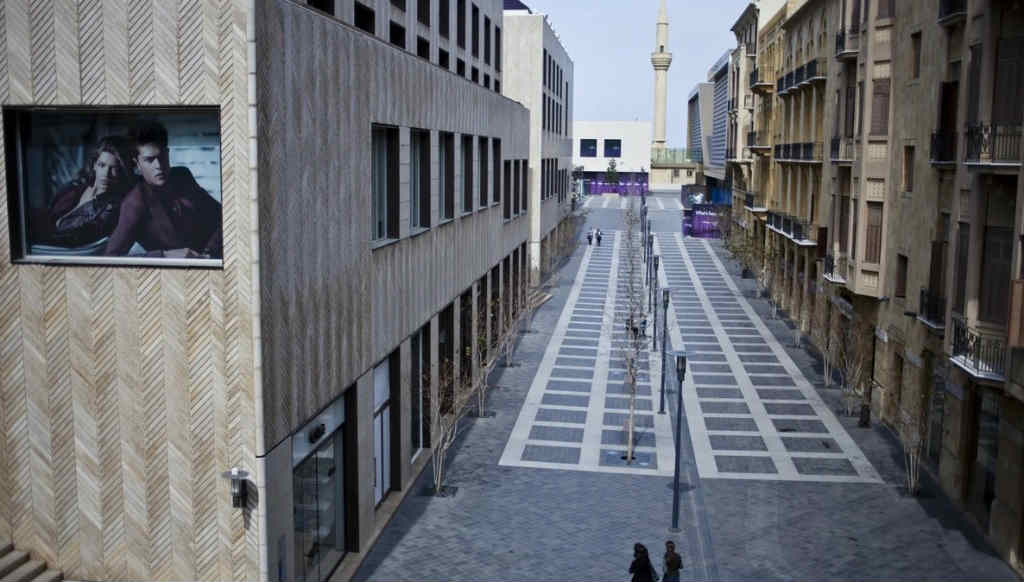 The Washington Post shared an article today on Down Town Beirut and how it was rebuilt after the civil war and now has everything except people. This is not the first time that this issue is raised and it is true that DT is without a soul but I disagree with some of the stuff mentioned by those interviewed in the article.

1- Rich people are going more often to DT Beirut and specifically to Beirut Souks as all the fancy shops are there. Businesses in the square were mostly hurt by the political tensions after 2006 when Beirut was fully closed for months and then due to the explosions and the security situation. Moreover, the widespread of the Arguile cafe trend, the tight security measures and lack of parking lots, as well as the overpriced lousy food served in some Beirut restaurants, are also responsible for the closure of some businesses.

“Even the rich people don’t bother coming anymore,” Mohammed Younnes, 27, said on a recent Saturday evening as he gazed at the empty tables of Grand Café, an eatery he manages in downtown Nejmeh Square. Businesses in the square, distinctive for an art-deco clock tower with “Rolex” written on its dial, are relocating or going bankrupt.

2- The reconstruction project did not demolish all historical buildings and Beirut was booming with tourists and Lebanese even when there were no parks or public spaces. In fact, it was the only decent place to walk between restaurants and shops and have a good time before 2006 so I disagree here.

But many Lebanese say that there is another problem: the reconstruction project demolished historical buildings and filled the area with upscale condos and shops. There are few parks or other public spaces.

3- Swarovski? Really?? If there’s anything the average Lebanese can afford, it’s Swarovski.

But the average Lebanese worker earns less than $10,000 a year and can’t afford the new multimillion-dollar residences or the swank offerings from the boutiques of Ermenegildo Zegna or Swarovski.

4- I blame Solidere for a lot of things but DT Beirut was booming and alive before 2006. Tourists and Lebanese loved eating, partying and just walking in DT Beirut but it all changed after the 2006 war and the endless political tensions. Nevertheless, Solidere has been doing a lot of wrong things and should take part of the blame.

After the civil war, Hariri founded a state-affiliated company, Solidere, which led the rebuilding effort and now manages downtown like a virtual municipality. The company, which declined to comment for this article, has been accused by architects, heritage-preservation organizations and everyday Lebanese of driving out the area’s original property owners and unnecessarily demolishing historical buildings.

5- I honestly don’t think parks are the answer here. Uruguay street is booming because it’s a cozy street where people can go and have few drinks. The real problem nowadays is that Beirut Souks and the lower part of Down Town Beirut are attracting everyone while the upper part is dead because it only has restaurants and there are no parking lots around it anymore. Add to that the fact that the road is closed every time there’s a parliament session or a demonstration. Maybe restaurants should try reopen in the lower part and see how things work out. Uruguary street is doing great and more pubs are opening every month.

Preservation activists and many Beirut residents say a rethinking of the center is badly needed. Hallak, the architect, said business would benefit from more cultural projects and public spaces. This would mean creating parks to attract families and sacrificing some profit for preservation, she said. For example, the building that once housed the famed Opera Cinema could become a cultural center, she said. Currently, it is a Virgin Megastore.

All in all, the fact that only millionaires can afford buying apartments in Beirut is not why the city is without a soul. Residential and commercial prices were always high but the city was alive and kicking. I used to spend hours in traffic just to go party at Buddha part and walk in the streets of Beirut. I think what this city needs is for the municipality to drop its rent prices to encourage businesses to reopen and create more parking spaces. Moreover, and some people are going to laugh here, but relocating the parliament to another remote location would most definitely bring back some life to Beirut and make a lot of Lebanese happy.

Thanks Mustapha for the article!