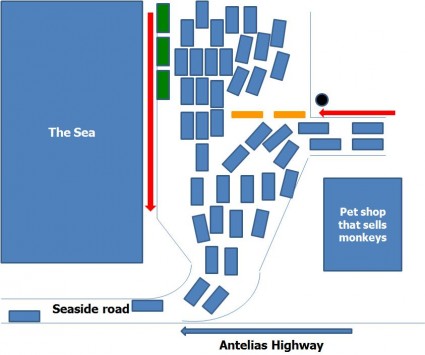 Those of us who drive in to Beirut from Antelias and further north on weekday mornings are familiar of the chaos of the marina roads. On my work the other day, I noticed that there isnâ€™t a single traffic sign showing who has the right of way, no traffic signals, no lane separation but Iâ€™ll talk about the dangers of the marina roads in another post.

This post is about the chaos that exists at the end of the marina road, right before getting on the seaside road.
So that our readers get some perspective, the blue rectangles are cars, the orange ones are traffic separators, the green ones are army trucks that bring in soldiers to jog in the marina on weekdays and the black dot is a traffic policeman.

You basically have 5 or 6 lanes (depending on how tightly itâ€™s packed) converging from the north, that have to be squeezed down to 3 lanes because of the orange separators (sometimes the cop puts his bike there too) and 2 lanes that come in from the east side. And all this traffic is finally converged into a two lane road that leads to the seaside. I swear, there are so many bottlenecks in this system itâ€™s insaneâ€¦

I personally stopped using this road since school started this year because it takes me as much time to go to work by taking the normal highway.