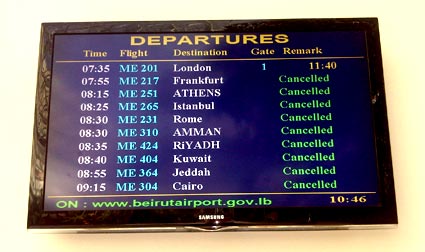 The MEA pilots are still on strike even though the strike was supposed to end yesterday. My wife went to the airport today and turns out her flight out of Beirut Airport was canceled and she was stranded there along with hundreds of other passengers. I managed to book her on a Jazeera Airways flight back to Kuwait but I have no idea if MEA will refund her ticket or not.

I didn’t have a problem when the pilots were delaying all the flights by two hours. I actually was effected by their strike and they had my full support on it. But completely canceling flights that’s a completely different thing. While a two hour delay is a hassle, canceling flights is a life changer. It has a much bigger effect on everyone. Imagine you’re on vacation somewhere around the world and your flight back to your home has been canceled. I’ve never been in that situation and I hope I would never have to. They had a lot of support from passengers and people when they were delaying flights by two hours but by canceling all the flights I believe they’ve lost all the support they had including mine. I was with the pilots before, but I’m not anymore.

Note: It’s interesting that I couldn’t find any news on this strike neither on Naharnet nor Daily Star.