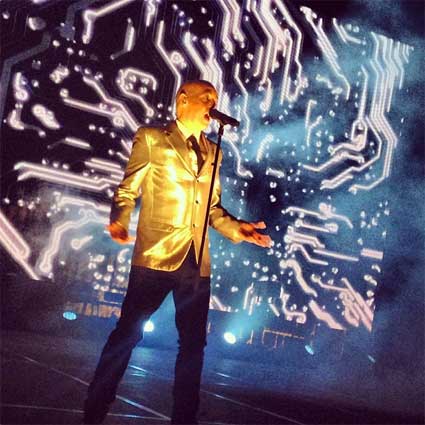 On Wednesday I went to the Lana Del Rey concert which I thought was pretty boring but last night I went to the Pet Shop Boys one and it was just incredible. First of all just a little backstory, my first cassette tape I ever purchased was for Pet Shop Boys back in the 80s. They’ve always been one of my favorite bands ever even though I really haven’t kept up to date with their recent work.

So anyway last night I got to the concert an hour early since I was hoping I’d be lucky enough to find a spot right in the front (I had the Golden ticket) and to my surprise the place was empty when I got there. I quickly grabbed a spot right in front of where the mic was placed and waited. There wasn’t an opening act for the concert but they were playing some pretty good music to get us moving. Then, the second Pet Shop Boys walked on stage the energy of the place completely changed. Even though the event wasn’t as packed as Lana Del Rey the people who did show up were true fans at least the ones who were standing around me in the golden ticket section. I was standing so close to the stage it was just unreal seeing them perform live and so up close. Neil Tennant was standing right in front of me and I was jumping up and down screaming wanting him to notice me.

They played a mixture of new songs and classic 80s and 90s songs that were remastered so they wouldn’t sound out of date. The changes were very subtle and I actually want to try and find those remixes online. Whenever a classic song came out the crowd just went wild as you can see in the videos I’ve put up here. Sadly the sound in the videos isn’t that great since I was standing right in front of the speakers which overwhelmed the tiny iPhone mic. Also at one point I rant out of battery and space on my phone hence why the West End Girls video ends abruptly.

Pet Shop Boys kicked ass last night and I can’t believe how old they are. I love them, 30 years later and they can still bring so much energy to the stage with their music and their never ending costumes. No exaggeration every two songs they were going backstage and changing into different outfits each one looking wilder than the other. Their two supporting dancers also did a phenomenal job as well. I’m so glad I went to the concert, it completely blew me away. For those of you who missed it you really missed out on a extremely entertaining and visually rich show. Hopefully they’ll come back again one day.