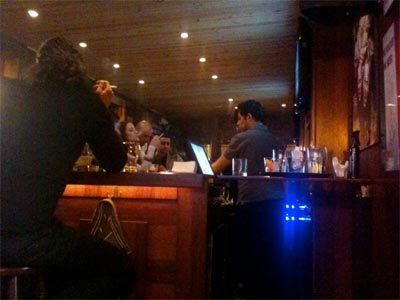 Awhile back I read on one of the Lebanese blogs (I don’t remember which) about how the nightlife in Jounieh was picking up so i decided to check it out tonight with Najib. We parked our car in the main Jounieh square next to two Super Night Clubs and decided first to pass by Lush and check it out. The place was packed and there was no place at the bar and all the tables were full. So we decided to keep walking to another pub nearby called Barly (or something like that). Again it was extremely packed with only a single table that was empty but booked for someone else. We then walked to a third pub further down the street called Hooligans. The bar was full but we found a sweet spot in the corner of the place (picture above) and sat down only to be told that table was booked.

It was like a big WTF? We’re in Jounieh not Gemayze whats going on here? 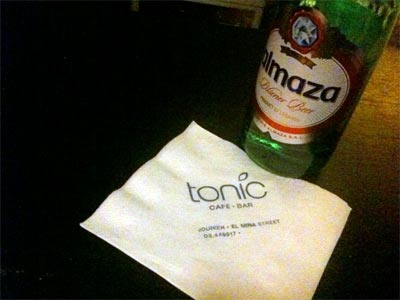 We finally found a pub called Tonic which had some empty seats at the bar. The place looked like it was getting spillover customers from all the other packed pubs but it didn’t matter, an ice cold Almaza tastes the same no matter where you are. It’s pretty cool how the night scene is coming to life in Jounieh, there is a lot of potential there and it’s a great alternative to Gemayze specially if you just want to grab a drink without having to waste your time driving down to Beirut.

Update: Found the blogger that posted about Jounieh, it was Ivy Says [Link]