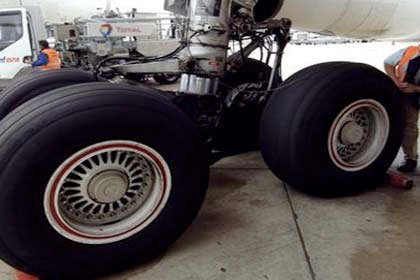 I travel a couple of times a month for work and this incident really is not helping me cope with the loose security at Beirut airport! How can a guy just be running next to a plane on the runway??

The National News Agency said passengers on the plane reported seeing a man in a baseball cap with a backpack make a dash for the plane as it prepared to taxi. He stumbled once and then continued towards the plane.

A Saudi operated budget plane “NAS AIR”, took off from Beirut to Riyadh and apparently when it landed they found a dead guy stuck to the tire! It’s a pretty gruesome sight to imagine!

The Saudi al-Watan daily said the man’s backpack included his personal belongings and no identification card. It quoted sources as saying that the man’s facial features were very clear.

The funny part is that the pilot apparently saw this incident but did not report it to the control tower! “Ummm, hello? Yeah, hi, just wanted to inform you that there is a man running on the runway. Just thought you’d like to know”

“The passengers and flight attendants informed the pilot, but he did not take any action and continued takeoff without informing the Beirut control tower” that anything was amiss, according to the NNA.

What if this person had some kind of explosive in his backpack? Who would everyone blame if something tragic had happened?

And the best part is that apparently there is easy access to the airport runways from illegal settlements around Beirut airport!

Lebanon has been suffering since the 1990s from the problem of illegal buildings in the vicinity of the airport that prevent the control tower from seeing part of the runway, they told An Nahar.

I am not familiar with the security protocol that would allow access to someone to the runways but internal airport security in Lebanon is crap. You don’t even need to make sure you don’t have any metallic items in your belongings when you pass through the metal detector. If it beeps, the guy gently pats you down, apologizes for the inconvenience and asks you to move on. On the other hand, in Saudi, if for some reason the metal detector beeps the security guard makes you take off your shoes!

The problem is that security is not the number one priority at Beirut airport. Just an example: there is a clearly marked sign at the first metal detector at the airport that requests you to take out your laptop and screen it. I’ve passed by that sign at least a couple of dozen times in the past year and not once was I asked to take pass my laptop through the x-ray machine. In the beginning I used to take off my watch, belt, mobile phone, keys and wallet and place them in the plastic bin. Now I just go through the detector without taking anything off and when it beeps, the guy checks my pockets and belt and let’s me go through.