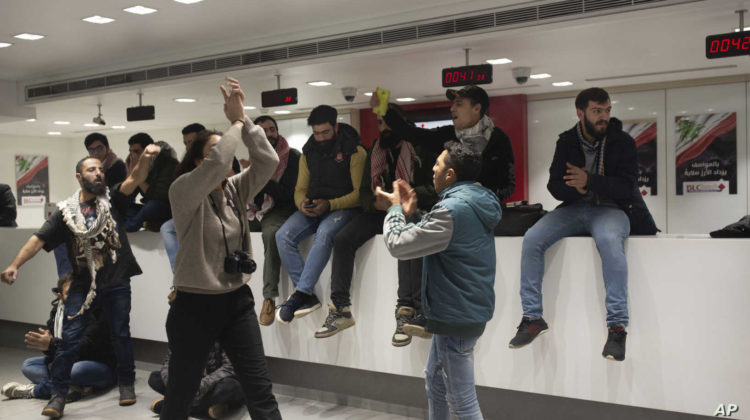 Anti-government protesters occupy the Hamra branch of BLC Bank Dec. 28, 2019 in Beirut, Lebanon. Banks have imposed weekly limits on withdrawals of U.S. dollars amid a shortage in liquidity and as the country grapples with its worst economic and financial crisis since the end of the 1975-90 civil war. The country has been without a prime minister since ongoing mass protests forced the resignation of Premier Saad Hariri on Oct. 29. (AP Photo/Maya Alleruzzo)

This is not a post to defend banks in Lebanon or undermine their role in the monetary and economic crisis, nor a post to criticize protesters and what the revolution has achieved so far. There were numerous righteous movements against the central bank and inside and outside several banks, but what has happened in the last week or so of attacks against bank employees and storming and occupying branches is useless and will backfire big time.

To put it simply:
1- If you think that banks are to blame for what’s happening and insist on getting your money out, aggressing employees will push the banks to shut their doors as they did at the start of the revolution, which won’t really benefit anyone. Today a decision was taken to shut down all banks in Akkar after BLOM branch was invaded.

2- Banks MUST give you the money you have in your accounts, it’s your right but no bank in the world has enough liquidity to give out large amounts of money all day. It’s not a matter of crisis or not, banks just don’t operate that way. For example, if 600 customers want to withdraw $300 every day from a Akkar BLOM branch (including ATM operations), this means the branch should have up to $3 million dollars per month in cash which probably has never been the case.

3- The real problem at the moment is not what your branch manager can or cannot give you, but the “unofficial” capital controls that are leaving branch managers in disarray and causing all these incidents. Let the central bank, along with the association of banks and the concerned ministries agree on official capital controls and inform people about them once and for all. Neither bank employees or customers are happy with the way things are going.

On another note, I think banks should invest some time and money to train their employees, especially customer-facing ones, on how to avoid clashing with customers and defusing a tense situation. Let’s face it, the bank experience has never been great in Lebanon (unless you know “someone”), so maybe a good idea would be to figure out ways to address the angry clientele, and make sure branch managers or even worse bank managers don’t come out and say crap on TVs or when confronting protesters that might make things worse.

Yes there’s an increasing lack of trust between banks and the Lebanese people, but we have to keep focused on the real problem at hand: the corrupt authorities, the lack of budget or economic growth for the past 10 years or more, the rampant corruption in all government sectors and the questionable monetary policies from the central bank. Stop attacking bank employees that are victims of this corrupt state, and let’s stay focused on having a competent government capable of taking us out of this mess gradually.