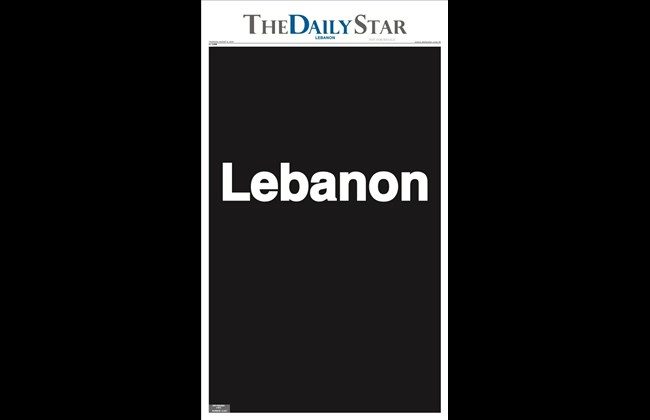 The Daily Star issued a blank issue today to take a stance on the deteriorating situation in Lebanon, calling on officials to wake up before it’s too late. The print edition listed on the 10 blank pages inside a list of woes including the ongoing government deadlock, the ever-increasing sectarian rhetoric, unemployment rates and public debt, the dangerously high pollution level, illegal weapons and the garbage crisis of course.

The real question that one has to ask: Is it already too late? And are officials capable of getting us out of this mess?

To answer the second part of the question, which is the easiest, no our politicians cannot get us out of this mess because they need it. They need sectarian rifts, corrupt public institutions, garbage mountains, impoverished areas, widespread of violence and guns and every other factor that reinforces their position as war-lords or Zou3ama. I don’t think I need to elaborate further on how incompetent and deceiving (to those who believe in them) all parties have been so far, facts speak louder than words.

Moving on to the first part, there’s no such thing as too late to change things and as long as we still have a country to live in, we must believe that we can make a difference in a way or another. As a starting point, all Lebanese have to realize two things:
1- We ALL share the blame for “useless” politicians, even if we’re not voting for them.
2- We must work on MINOR changes and stop hoping for drastic reforms.

1- Why are we to blame for useless politicians or utter idiots that get elected? Because if we always believe our politicians are corrupt and useless without doing anything, chances are we will end up with such candidates getting elected. In other words, if the silent majority keeps believing that nothing good will ever come out of the system, nothing will eventually.

In the last elections, the silent majority was the biggest loser once again because they assumed traditional political parties will sweep the elections and that’s exactly what happened, and we did have other alternatives (in most cases), even if not as good as one would hope for. When a candidate from the ruling political parties loses to an independent, it sends out a strong message even if this independent candidate has a hidden agenda.

So in two words, GO VOTE!

2- When the garbage crisis started and we went down to protest, demonstrators genuinely believed something good will come out of this movement until some started asking to topple the regime and storm the parliament. Yes this whole political system needs to be revised but the structure of our society, the complexity of the system and the grip that parties have on all the foundations of this country make it impossible to hope for such swift changes.

That’s why we need to start with small changes, one at a time, and consistently work on achieving small gains and building the proper foundations to be able one day to aim for bigger changes. This process will take years of lobbying, determination and dedication and will require from each and everyone of us to influence their surrounding starting with family members and close friends.

It is important to start with ourselves because that’s where the real problem lies. I look at my Facebook timeline whenever there’s a political crisis and cannot but laugh at how naive some close-by friends and even family members sound like. They spend hours and days defending blindly their political leaders and justifying their lies and they’d never admit they’re wrong even when it hits them in the face. Even worse, when a small group of people lobbies for a just cause, they’d ridicule and ignore them claiming there are bigger issues at stake. This mentality needs to be changed, every rational Lebanese with critical thinking skills must try to influence as many people as he can and ask them to look at the bigger image once and for all.

I’ve been trying to do that relentlessly through the blog for years and I sure do hope that I was able to influence enough people, and there are plenty of bloggers, activists and intellectuals out there doing the same but much more are needed.

To put things into perspective, let’s take a look at the garbage crisis for example. It’s been four years now that the Neemeh landfill was shut down, garbage mountains are still piling up, but several municipalities have opted for sorting garbage from the source and began recycling. We obviously need a large-scale solution (NOT AN INCINERATOR THOUGH), but we’re achieving small gains by raising awareness and local businesses are becoming more environmentally aware which is very important too. Some may say that I’m being too optimistic but I disagree. Just look back 5 or 6 years ago and notice how people’s mindsets have drastically changed.

All in all, we need to wake up and stand up to these politicians. We have to do it for ourselves and the future generations. We have to consistently make ourselves heard and influence as many people as we can to do the same. Several studies show that the majority of Lebanese don’t trust their politicians and it is true but many still vote for them because they despise their rivals or because they’re indebted to them. We don’t own our politicians anything, they should be serving us. That’s the only way to move forward.