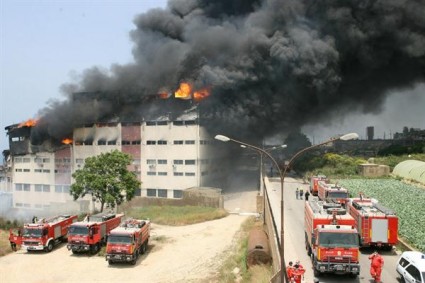 The comment below was just left under the post “On the Safra fire and Crisis Management in Lebanon“:

Hello! im just gona reply on some of the critics you published about our fire department and helicopter pilots.
Well about the fire truck that had no water? that is wrong, i am sure its a rumor! but i can tell you this, the equipment that they had wasnt enough to enter the building! – fire fighting equipment is very very expencive and delicate(the helmet, the breathing gear the cover clothes the boots the personnal fire hose: have one thing missing, u cant do anything)! in our department in my town we take greaaat care of them, but usualy when an internal fire happens (building fire) and when we’re second to arrive, its always us who provide the equipment because usualy others are regardles. But NO truck is parked in his station without water!!
So at safra, they waited for another fire station to provide the needed equipment.
Note that our truck’s tires are 7 years old. The government cant even provide us with our vital needs.
Im a new volunteer, this was my 6th mission, and all my training is what my friend (volunteer for 3 years now) tells me to do. They dont give us training, we learn in missions.

So please, im beggin every single critic, when you’re talking about the Civil Defence, notice that they are very brave hard core men, who are willingly and couragiously fighting for our safety, but everything comes at a price, and honestly, its not us (members of the civil defence) who should pay the needs of this department, its the government.

About the Helicopter pilots, the whole idea was messed up, it was wrong. It wasnt suggested by our colonel, but by a millitairy person. how can you EVER extinguish a fire under a cover ? ( the fire was covered by the roof!!!) its impossible! the materials inside are flamable fibers, and colorants, it needs specialy picked Foam (the white material we put in our trucks’ water reservoirs, specialy designed for particular fires) not just sea water! it helped in one thing, it delayed the section collaption. it cooled it.
Yeah and your friend who got showered? aahaha, this bucket is designed for forest fires, where u need to spread about 200L of water on the biggest area u can cover! if you want to put them in on place, the pilot needs to hover(yejmad ma7allo) above the building by as little as 15 meters and throw them, but listen up, its a helicopter, the tempreture beneath them got to 1200 degreess, that makes the air above it SUPER unstable because of the heat! so it was impossible…

One more thing i have to say, look at the photo above,picture from TheDailyStar, a fire reaching this point and in this situation, is impossible to extinguish. No fire brigade in the world can do it.
No equipment can handle 1200 degrees, to alow a man to get inside of the building with a fire hose.. The only possible thing to do is to Blockade (men 7asser) the fire from all sides and wait untill it burns out.
The cause of the building collapting is simple: the iron rods inside the concrete walls melted, and the heavy duty structure failed. So blockading the fire was a bit useless, because there was so much flamable material inside that the collaption was eminent! there should have been like 7 or 8 fire hoses shooting water at the building from all sides at the same time.. but think a bit, (they dont give us new tires) were they good enough to provide about 6 tones of diesle and about 100 tones of water every 6 hours? that’s about 20 000$..
hahahaha That’s the big joke! but that joke made a all the workers inside cry.
There was a rumor that there was no small fire extinguishers inside the factory.. if it was true, that would be the cause of this catastrophy, cz every fire starts with a little match.. But i dont know.
Because of that fire the image of the civil defence is decreasing, but im trying everything to show that those men are one of the bravest men i have ever met! Other men shoot bullets to kill and save our country, We shoot water, to stop fire and Save our people!
Sorry about the long post.