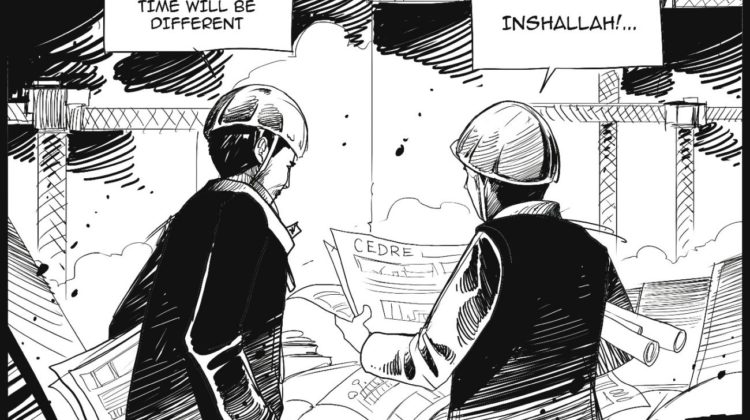 We’ve been to Paris already three times now, and every time made reform promises that never came to be. Our debt has accumulated over the years, most of the projects to enhance the infrastructure and improve the economy were put on hold or cancelled, the corruption is at an all-time high yet they want us to believe that this time will be different.

We all want to stay hopeful and optimistic but economic reforms don’t work that way, and no “blue eye-like” symbol or prayers or wishes or empty electoral slogans are going to reduce our debt, create jobs and bring us 24/7 electricity. The CIP,”Capital Investment Plan”, that we’re presenting at the CEDRE conference aims at financing the rehabilitation of infrastructure that has degraded over the last few decades but the biggest hurdle that Lebanon is facing is gaining donors’ trust and I’ll be honest: I have no idea why anyone would agree to lend us some money or invest in projects here given the levels of corruption, incompetence and mismanagement that we’ve reached, unless they want to drain us further or have some political ambitions here.

Nevertheless, and assuming some countries genuinely wish to help Lebanon (which is never the case), a good way would be to teach us a lesson and cut us off any financial aid till the ruling parties prove that they’re serious about reforms and fighting corruption. I’ve been following up for weeks on that CEDRE conference and the vision document that Lebanon is preparing, and most of the projects that are included in it have been there for the past 20 years throughout the previous Paris I, II & III conferences.

Some are claiming that this is Lebanon’s last chance to save itself and start the reform process, and that the country’s economy and stability are at risk if CEDRE fails, but we’ve been hearing that same rhetoric for the past 10 years or more.

Paris donors want to change the way the Lebanese state operates. They want “jurisdictions that provide lucrative returns and lower levels of risk” and investors will “ask for fiscal discipline, appointment of regulators, and the passing of a backlog of legislation” but that is not going to happen if ruling parties get re-elected. It’s really as simple as that and a part of me doesn’t want CEDRE donors to give them an electoral boost and delay any aids up until Elections are over and reforms are in place.

On another note, I’ve asked around and barely anyone has access to this CIP document and the vision document we’re presenting. Moreover, the headlines surrounding CEDRE are quite flashy and ambitious and lack specifics. “900,000 jobs will be created”, “22 electricity-related projects over three cycles with an investment need of $5.6 billion”, “a $140 million gas pipeline to feed natural gas and generate electricity at current power plants”, “A total of $1.4 billion is budgeted for solid waste projects” etc etc ..

I’ve been going through Executive Magazine’s reports on CEDRE & the CIP document and a simple look at the power-related projects show that the proposed projects will only pollute further, have exorbitant costs and barely rely on using renewables. The author of the article, Ali Ahmad who is the director of the Energy Policy and Security Program at the Issam Fares Institute for Public Policy and International Affairs, argues that by constructing at least one large solar photovoltaic power plant by 2020, “we could be saving around $3 billion by 2030, increase renewable energy production to 24 percent of the country’s total, produce less harmful and polluting emissions, and improve energy security”.

All in all, I am not very optimistic about CEDRE (not as pessimistic as this guy though) and a part of doesn’t want it to succeed because it might help those in power regain their positions, and by doing so, increase our debts and make things even worse. We don’t need international donor conferences to cut down on expenses and start reforms, we don’t need help to invest in renewable energies, encourage recycling and upgrade our waste water treatments. We just need those who in power to understand that they’re harming their own families and children by the way they’re running the country, and revert to experts and technocrats when it comes to handling a crisis.

Speaking of experts, what happened to that McKinsey report? It would have made sense to have the report out before the donors’ conference no?