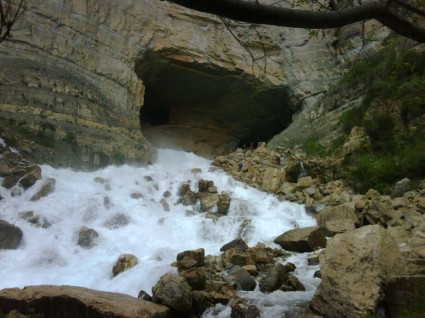 The grotto of Afqa gives birth to Lebanon’s largest river – Ibrahim River – which flows out through several outlets, streams, and water pools. The cave’s gaping entrance dominates the mountainside, as water gushes out making its way down the valley below.

When the flow of water slows down in the summer, it is possible for one to enter the cave and explore the many tunnels and chambers deep into the mountain.[Link]

I remember very well the first time I visited Afqa Cave because it was on 9/11. We rented bikes and took off from “Pic Blanc” in Hrajel and rode all the way to the cave. The road is a bit tough as there are lot of roads to climb but it’s quite fun and you go through many beautiful villages. Once you get there, there’s a restaurant at the bottom of the cave overlooking a beautiful waterfall. We went up to visit the cave but did not dare go in deeper as we were not equipped and it was pretty dark.

It occurred me this year that it’s been a long time since we did this trip, so I called some friends to try set it up, before I find out by mistake on the news that you can’t get there anymore. Apparently there’s some illegal construction going on and there are lots of troubles between the residents and the ISF and Lebanese army and roads are being cut.

A footage on TV showed how some areas leading to the cave have become and it’s really sad. Lots of ugly buildings and constructions left and right.

I am waiting for problems to end to plan another trip and see if the cave and its surrounding are still as they were. Until then, I urge the Ministry of Tourism to take better care of the cave and organize trips to it cause the two times I went, I could have bombed the cave for all I care and no one would have noticed.