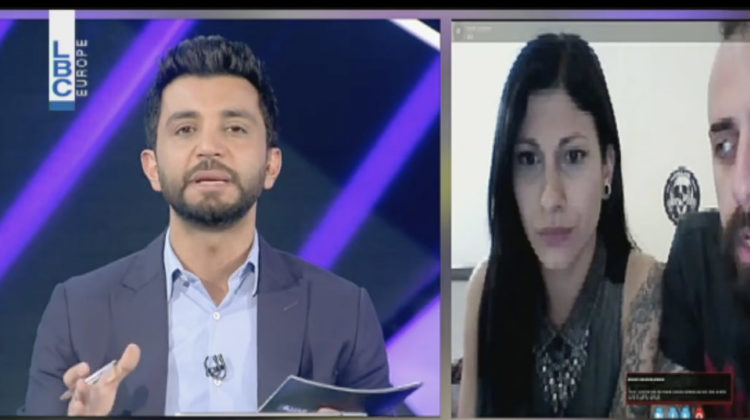 I’m glad I tuned in to watch Joe Maalouf yesterday, especially the segment on the gothic-style wedding that took place in Ballouneh and caused in controversy. To be honest, I didn’t comment on the wedding yet because I try to stay away from religious topics and because I thought the last thing the newly-weds would want is more people arguing about the happiest day of their lives.

Nevertheless, I couldn’t help not write something after hearing what this priest had to say about Dina and Nadim’s wedding, about tattoos, gothic-themed weddings and several other things. At first, I thought he’d take a rather positive stance on the wedding, given that the couple got married in a church, but then he flipped and started labeling the couple as satanic, condemning their anti-church practices and held the Holy Book and his cross as if he was about to start performing an exorcism.

I have no idea who that priest is, but all I know is that him and others like him are the reason I’ve been staying away from church for the past years, and unlike what he claims, staying away from church and priests doesn’t mean you’re steering away from Christianity. I am just not interested in debating priests who believe tattoos and yoga are satanic and anti-Christian teachings, and are offended by a groom and bride dressed in black and wearing skulls, while overlooking the lavish weddings and outrageous practices taking place inside their own churches and by other fellow priests. In fact, I couldn’t care less what priests do or do not, as long they don’t tell others what to do, and quote the Holy Book whenever they feel is appropriate. The mere fact that he bothered to go on a TV show and criticize physical appearances and bash tattoos, says a lot about this priest’s priorities.

When some priests are charging outrageous amounts to book a church, or attend a funeral or a wedding, this is not what Jesus taught us I’m sure. When you get a price list of priests, bishops and their chauffeur while grieving the passing of a beloved one, I’m pretty sure Jesus wouldn’t approve of that and the list goes on and on …

Unfortunately, any religious controversy is drawing two extreme sides recently: those who bash religion for the sake of it, and those who defend religion at any cost and both end up inciting further hatred, while the moderate voices, the likes of Father Georges Massouh who had just passed away, are often left unheard. On a side note, Gino was exceptionally good yesterday and his arguments were far better articulated, more constructive and less extreme than the ones he usually shares on FB.

To sum things up, all I have to say is congrats to the newly weds and I hope you have a happy and prosperous life! Your wedding may have been unusual but it looked more fun than the majority of weddings I’ve attended in the past 10 years. I’m now tempted to visit Dina and Nadim’s shops as soon as they’re back and get to know them. I’m still not getting a tattoo though and not because it’s satanic haha!