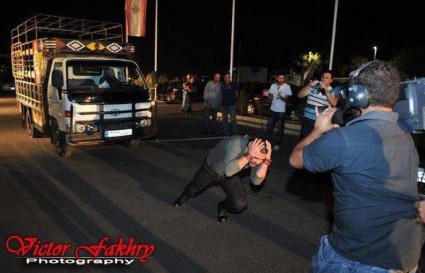 Lebanese Alex Riachi should have entered the book of records by now after he dragged trucks weighting more than 10 tons with his ponytail. The world record is held by an Indian national who has only managed to drag 6.4 tons with his hair.

Alex is asking now for an official backing from the President of the Republic Michel Sleiman to enter the Guinness book of world records. He claims that he is capable of tugging an airplane with his hair but he has not been giving permission to do so at Rafic Hariri’s international airport, as well as breaking large rocks with his hands and sustain the weight of a 700-kilogram rock on his chest. [Naharnet]

Instead of backing stupid world records such as the world’s largest lemonade cup or longest Kabab sandwich, we should give this man a chance to prove his strength and break some decent Guinness world records!