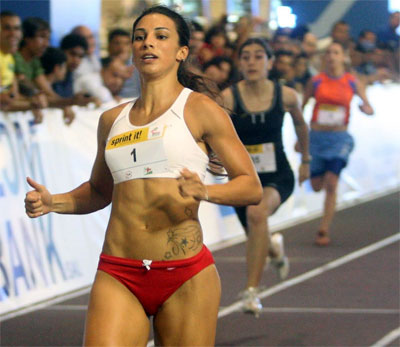 A reader going by the name of Bob left the following comment below which gives a different story to what happened to Gretta:

You guys are so simple minded. You are discussing based on what RRA ( Grettaâ€™s club) president wrote in behalf of Gretta , trying to attack the National Olympic Committee and the Lebanese Athletic Federation ( because he was banned for one year the result of his behavior), and of course attacking the coach of Gretta, because he never wanted her to be coached by someone who doesnâ€™t work for his club, on whom he cannot impose his authority and with whom he had many conflicts and finally he got an opportunity to revenge over the media.

Grettaâ€™s coach is a happily married man with the most gorgeous wife and enjoying a new born babe. He trains her since 2009. Anyone who knows him and knows Gretta will make fun of the articles written in the newspapers.

Gretta and her president reacted very fast without even knowing why she was sent back. Relying on gossips instead of waiting for the report which the NOC and LAF will post soon about what really happened in London.

She could have came back and remained silent until a report was delivered , then they could reply and react.

Gretta went to the Olympics because she is the best female athlete in Lebanon, but she was absolutely not excited to race. And who are close to her might have read her status on facebook. â€œNo goals , no expectations , but enjoy..â€

Since day one she didnâ€™t submit to her training plan, she only trained once then she disappeared from the sight of the officials and her coach. The rest of the Lebanese Olympians were always with their team and officials, like any other Olympian in the village, because everyone is there to raise the name of his country and they follow a strict discipline.

Gretta wanted to have complete freedom and be busy socializing and having fun. No one saw her face after day 2, and they could only find her with this Irish trainer around midnight , 3 days in row and lunchtime the day of her race. They remained silent despite the chef wanted to go and rebuke her but many stopped him twice. Her coach is a Doctor and runs a medical center, he left his work and went there for her to be super ready for the race and do a personal best at least.

Her coach warned her that he will write a report that she is always absent from the sight of everybody and not submitting to the plan (trainings,physio, nutrition, rest, focus etc) designed for the camp. She didnâ€™t care about it, and continued neglecting the rules. The day of the race, in the morning her coach wrote a report about Gretta not submitting to the plan and never training and being always absent, therefore he will decline from coaching her. The Federation will post the report of her coach and everybody will see that thereâ€™s absolutely nothing of what is mentioned in the newspapers.

Lunch time again they saw her with the Irish guy, and during the pre-race warm up, her coach went to the stadium and found her in the Irish boot , wearing green jacket exactly like the Irish team, and being coached for pre-competition by the Irish guy. Grettaâ€™s coach warned the Irish guy that what is happening is illegal and the Olympic committee can take severe action against such behavior and left. The Irish guy followed Grettaâ€™s coach and tried to convince him that he doesnâ€™t have intention to coach her and that Gretta told him different story and apologized a hundred time.

By that time, The officials arrived to the warm up area to watch Gretta preparing for the race. They met Grettaâ€™s coach arguing with the Irish coach. Finally they saw Gretta sitting in the Irish boot wearing green like them. (Gretta didnâ€™t realize the officials were on track watching her). The NOC president lost his mind and wanted to go and stop her from racing and send her back to Lebanon on the first plane. many stopped him from doing so and asked him to allow her at least to race. One of the federation members took a picture of her in the Irish boot wearing like them. (All the Lebanese team, at least the day of the race wore Lebanese Red jacket written LEBANON on the back). Gretta went to stadium with the green jacket and no one could guess which country does she represent if it wasnâ€™t announced. Of course no one expected her to run well after all.

After the race the NOC and the LAF called her and took her badge and claimed that she will go back to Lebanon on the first plane.

I guess you all can assume why she was sent back after the accumulation of many irresponsible acts. Being hurt and angry, she imagined by her own the scenario that might have happened and reacted through her club presidentâ€™s announcement.

Soon the NOC and the LAF will post all details.