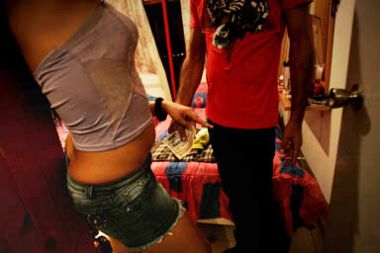 I was with friends the other day having lunch and discussing random topics until we opened up the topic of super nights clubs in Lebanon and prostitutes.

One friend who knows a lot about the law explained to us that prostitutes are called “artists” in Lebanon. In fact, according to the Lebanese law, there are 5 descriptions for foreign workers in such activities:
– Fennene (Artist)
– Moudallika (Masseuse)
– Mounadila (almost like a waitress)
– (Forgot that one)
– Circus athlete or Ice Skating dancer or other similar activites.

The artists is allowed to sit with customers and go out with them or dance on the bar. Waitresses are not allowed to do so.

Like seriously, who has the time to come up with such definitions? And why complicate such simple issues?