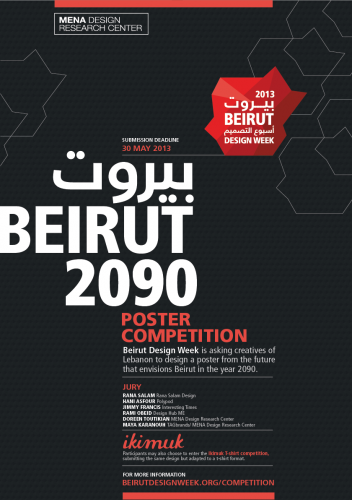 Beirut Design Week is organizing a competition where graphic designers and creative people have to design a poster from the future that envisions Beirut in the year 2090. I don’t know why they chose a date 77 years from now but it would be interesting to see what the participants will come up with. One thing is for sure is that if we keep going at this current rate, we’d barely become another Dubai by 2090.

We are asking graphic designers and creative people of Lebanon to design a poster from the future that envisions Beirut in the year 2090.

Imagine the world in 77 years from now. What has Beirut become:

A haven of cultural renaissance and a high-tech hub in the Arab World?

A city of polluted decay enforced by war and destruction?

Another Dubai, with a dense gridlock of high-rises and cars?

Or an entirely new concept of city life and culture that is yet unimaginable by the citizens of today?

This is your chance to explore your imagination of your city’s future with no constraints, and show the public your creative design and conception skills. You will design a poster that acts as a personal visualization and interpretation of Beirut in the year 2090, while depicting a scene or showing an essential side of the city’s future character. You may use any media such as illustration, photography, typography, or computer generated graphics as long as it can be sent as a digital file and printed on a poster. [Link]