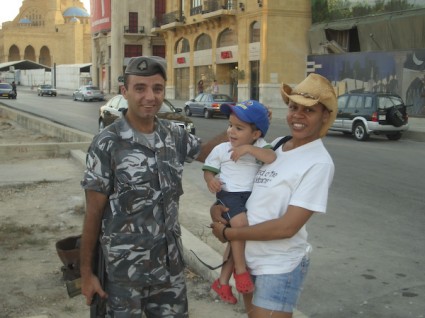 The video Mark posted on the “Dancing Darak” made me ask around to see whether this guy is for real an ISF officer or not, and reminded me of the incident I had once while driving.

Apparently, there are two plausible options here:
1- The officer is really in the Darak (ISF) but I doubt he’ll last until the end of this week before getting fired.

2- The officer was a part-timer in the ISF (on a contractual basis) and did not give away his suit back upon the contract’s expiration.

According to a friend of mine, there are a lot of Lebanese enrolling on a contractual basis with the ISF and keeping the suits afterwards. What they do is that they wear the suits, pretend to be real officers and offer drivers to pay bribes instead of receiving tickets.

Few weeks back, one of those fake officers was caught after it turns out he was involved in major car thefts with some friends of his in the Maameltein region. He would stop a car for talking on the phone or not wearing the seat belt and then some friends of his would storm the drivers with weapons and steal the car.

Question is how can one detect those fake officers?
– ISF officers do not usually hide in the dark and come out of nowhere to surprise you.

– ISF officers rarely are alone but rather work in groups and there’s always a car or a motorcycle next to them.

– Most of the times, there’s a checkpoint involved when ISF officers are distributing tickets.

If anyone has further tips on how to avoid those fake officers, please feel free to share them.

PS: I think the ISF or Minister of Interior should issue a PR warning to Lebanese citizens on those imposters.