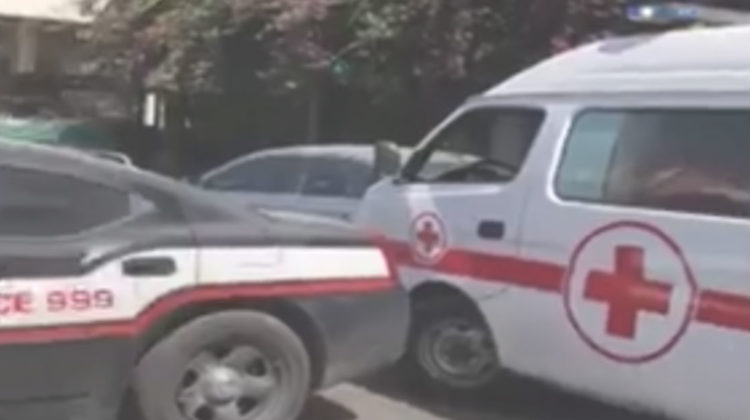 Last week, I was stuck in traffic right next to an ambulance waiting for armed men in civilian clothes to clear the way. I have no idea if the ambulance was in a rush or not, but there was no where to go and we all had to wait for some politician to pass by. Unfortunately, I couldn’t film it because security people were all around monitoring us. With the elections nearing, our dear politicians are attending events left and right without giving a damn about other cars or ambulances on the way.

This video was shot next to the Forum de Beyrouth and here’s another somewhere in Beirut. Yesterday, an armored convoy was cutting through cars like a madman on the maritime road (probably to catch some lunch).

Would you rather get shot or get humiliated?

This reminded me of an incident that happened with a good friend of mine. He was going to Zahle with his family on a weekend and he got hit by a clumsy driver from behind on the way up. My friend went down calmly to call the insurance but was surprised to see the other driving asking him to hand over his driving license and ID and yelling at him. He refused to do so at first but the guy kept on insisting and threatening and even showed that he’s carrying a gun, prompting my friend to hand over his papers. As it turns out, the guy was some highly ranked security official and there wasn’t much my friend could go except wait to get his papers back.

It was either get humiliated or get shot or maybe both who knows!