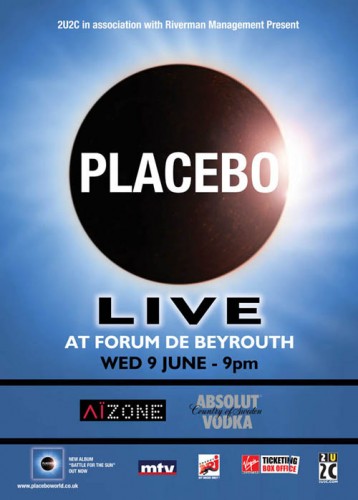 Placebo landed in Beirut few days ago and will perform their concert tonight at the Forum de Beyrouth.

However, similarly to what happened with Gad el Maleh last summer (and unfortunatelly worked), some Lebanese activists are trying to stop Placebo from playing by claiming they are Israeli supporters.

Why so?
Because they played in Israel.

Like serious, wtf is wrong with those people? Placebo is one of the most famous bands in the world and it is normal that they play all over the world including Israel.

“The band must choose either to play in Lebanon or to play in a state that continuously violates rights,” Idriss said on behalf of the groups, which include the Campaign to Boycott Israeli Supporters in Lebanon and the Campaign for the Lebanese Boycott of Zionism. “

How backwards this guy is? And who does he think he is to impose on Placebo where to go?

The interviewer then asked if it was important to have Israel’s endorsement these days, to which Molko quipped: “Yeah, if you want to go sailing.” [Naharnet]

How is that endorsing and supporting Israel? And Is Molko a politician to give his opinion on that matter? He is probably more worried about his makeup than what’s been happening in the world.

Added to that, if you check his profile:

“Born to an American international banker father of French-Italian heritage[1] and a Scottish mother, Molko’s family moved frequently during his childhood including spells in Scotland, Liberia, Lebanon and Luxembourg.” [Wiki]

You’d notice he’s been in lebanon. Did they ban him from playing in Israel? I think not!

I think we should start a petition against those activists and jail them for backwardness and public harm as well as projecting a bad image of Lebanon.

My friend from the Beirut Spring had an opinion on the matter as well.