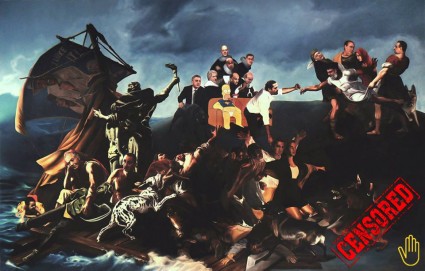 The artist behind this painting is Mohammad Saad and the painting above is a parody of 6 paintings:
Francisco Goya – The Third of May 1808
Theodore Gericault – Raft of the Medusa
Michelangelo – Creation of Adam
Raphael – The Deposition
Rembrandt Van Rign – The Anatomy Lesson
Frans Snyders – Dogs Fighting

To be honest, I didn’t think too highly of the painting but that’s not a reason to ban it, given that it was really banned since the spokesperson for JABAL, Ms. Zeina Antonios, told Beirut.com the painting was pulled because it was “too expensive for the show”.

On May 8, Fransabank launched the 9th edition of its JABAL exhibition at Hotel Le Gray to great success, with 18 of the 25 artists having sold their artwork during the launching event alone.

But one artist’s work – which appears in JABAL’s official catalogue – never made it to the actual exhibit. Mhammad Saad’s Farewell Beirut depicts Hezbollah leader Sayyed Hassan Nasrallah (in addition to various other Lebanese politicians, including former Prime Minister Saad Hariri, Free Patriotic Movement leader Michel Aoun, and Lebanese Forces leader Samir Geagea among others) as a character in one of Michelangelo’s most renowned works, The Creation of Adam. [Link]

See Also:The Archive Of Diab Alkarssifi: A Homeless Lebanese Man In London With A Rare Archive Of 27,000 Photographs
Posted By Najib
Categories ART,CRITIQUES,LEBANON