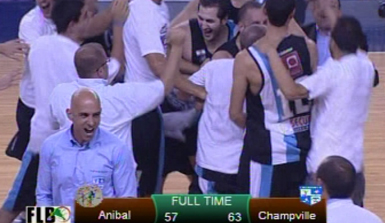 The 2011-2012 has finally come to an end with Champville clinching their first title after beating Annibal-Zahle 63-57 in Game 4. As a result, Champville won the series 3-1. The finals did not end without problems though, just like the semi-finals, as “A large part of the Anibal audience was absent from the game in Zahle after online appeals were posted on the Lebanese Forces website calling on March 14 supporters to boycott the game and to follow it from the Martyrsâ€™ Square in Zahle.” [Link]

I am sick of people bringing politics to sports, and I am sure that at the rate we are going, this league is going to run out of fans and die out soon, specially that we have absolutely no young and promising Lebanese players to look up to.

In that context, I was told that Champville is paying one of its foreign players, an ex-NBA player called Marcos Haislip, 2000$ per day, which means around 50,000$ per month if we take out the weekends. Isn’t it wiser to invest all this money in training programs for young Lebanese talents?