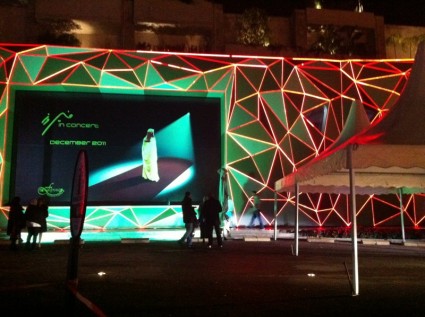 Every concert Fayrouz has held in her 30+ years career has been a major success and a night for all to remember. Back in 2010, people stood in line for hours to attend Fayrouz’s performance at Biel, and she managed to exceed their expectations even after 4 years of absence.

Having said that, the last two concerts Fayrouz held at Platea in Jounieh on the 9th and 10th of December were pretty disappointing, or not as expected, from what I heard, and they were not marketed as well as a Fayrouz concert should be. Indeed, I was surprised to hear many Lebanese unaware that she is holding new concerts.

To begin with, this new place “Platea” is unheard of and its location (Sahel Alma) is a nightmare for concerts. There are 4 restaurants facing it (Schtrumph, Al Balad, Tilal al Sahar and Serail), no parking lots, poor residential areas around it and small roads leading to it.

Second of all, I was told this place is supposed to be an opera house in the near future, but from what I heard, it is still unfinished and not well prepared to host a concert worthy of Fayrouz. Lighting was bad and there were black drapes all over the place.

Third, a friend who went there told me the orchestra was not that good and Fayrouz took a break between every 2-3 songs while they continued singing her songs. Added to that, she did not surprise the audience with new releases.

Fourth, even the closest seats were far from the stage and you could barely spot Fayrouz. No cameras were allowed and there were security everywhere monitoring those who take pics. I never really understood why we are not allowed to take pictures in Fayrouz concerts. I guess she likes it that way and we have to respect it.

Having said all that, watching Fayrouz live is a dream for many, and I am sure fans were pretty happy to see her perform again on stage, but it seems as if those concerts were rushed and badly managed and not worthy of a legend like Fayrouz.

PS: There are still two scheduled concerts at Platea on the 16th and 17th of December.