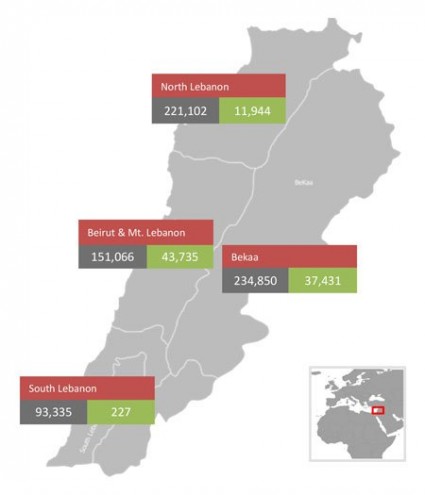 These numbers are updated as of October 17 2013 as per the UNHCR Lebanon.

These UN statistics are particularly important in Lebanon, where government numbers are unreliable and haven’t been updated since March 2013, at which time the Lebanese government estimated that more than 1 million Syrian refugees were in Lebanon. The UNHCR readily provides figures for an average waiting period for registrants, showing the amount of time that families must wait before connecting to the UN’s support networks in Lebanon, as high as 42 days for refugees in Beirut and the Mount Lebanon region. Between October 8 and 17, processing times increased by two days on average in the north and decreased in the Bekaa and the south (one and two days respectively). Overall, processing times increased by one day on average across Lebanon. [Source]