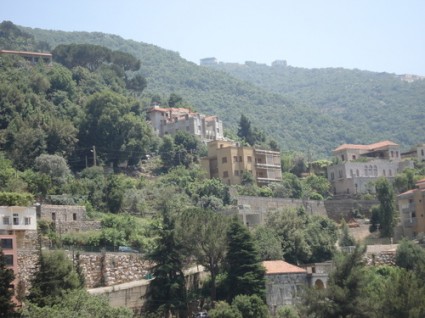 Dlebta village, where a huge land was sold to a Saudi

Every now and then, there’s a public outcry in Lebanon as a result of the selling of huge lands to Arabs, mainly Saudis. The last one was 2 weeks ago when a huge land in Dlebta, Keserwan was sold to a Saudi prince.

Of course I do agree that we should forbid the selling of massive lands to non-Lebanese, but the problem is not in the laws, but in not respecting them. In fact and per the Lebanese law, non-Lebanese CANNOT buy more than 3% of any Kaza in Lebanon, and more than 10% in Beirut. Added to that, any land exceeding 3000 square meters cannot be sold without the approval of the government.

This being said, the Dlebta land exceeded 3000 square meters, yet was approved by the government and signed by the President of the Republic and published in the newspapers. This means that the selling was a long process that had the Lebanese government involved and many MPs and officials. Added to that, I may be mistaken but I think the municipality has to know about any selling that involves a non-Lebanese or Lebanese, but I canâ€™t confirm that.

If we care that much about our lands and villages, and don’t trust our government or representatives, the least the municipality members and the mayor and the residents can do is keep an eye on the lands. There’s no way you can sell such a massive piece of land without anyone knowing, especially in Lebanon where everyone knows everyone and Dlebta is not a far away village in the middle of nowhere. Moreover, I am almost certain that some Lebanese, including members of municipalities and mayors and local officials, are directly or indirectly benefitting from those sales, or else you wouldnâ€™t be hearing reports about 80% of Ajaltoun, Rayfoun and Mayrouba being sold to non-Lebanese and no one caring about it. As far as I am concerned, the majority of those protesting anywhere in Lebanon are either slow to react and havenâ€™t done their job properly or want to take part in future sales.

Just today my friend was telling me that a Jordanian guy came to visit his town over the weekend and wanted to buy a huge land for 5 million dollars that overlooks the whole village. Luckily enough, the owner of the land refused.

All in all, there are many ways to prevent the selling of such lands in the future, but reacting to the sale after itâ€™s done while another deal is on its way is the wrong way to go. Maybe itâ€™s better not to protest at all if you are not willing to do anything about it.