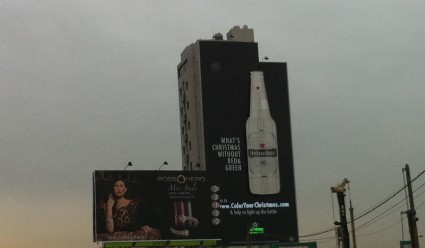 Update: I received an answer From Carol, who’s apparently one of the people behind that idea, on why the Giant Heineken bottle was not lit. Apparently the bottle is in direct synch with the digital feed; however, it’s on energy saving mode and lights up on a certain schedule as indicated on the map (if you click the Dbayeh button on the website): 7:30AM-10:00AM & 3:45PM-2:00AM. I will make sure to check it again tomorrow morning as I will be passing by Dbayyeh around 7:30 am.

In the spirit of Christmas, Heineken launched a website called ColorYourChristmas.com where every new click lights up the giant Heineken bottle in Dbayyeh. Yesterday, I saw a small part of it was lit up but this morning, nothing was showing.

I don’t know what went wrong, maybe the electricity went off but it seems to me they are lighting it up manually. It would have been cooler if the website and the giant bottle were synchronized.

PS: It could be that someone drunk went up and tried to drink it. This remains to be seen. 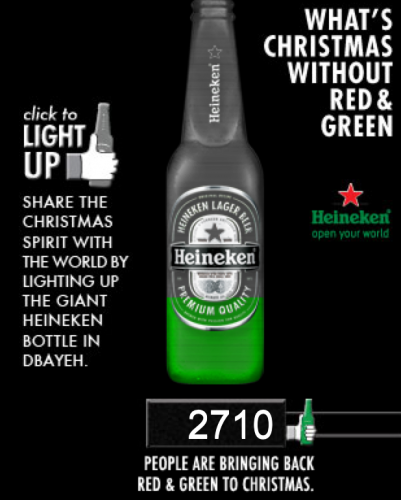