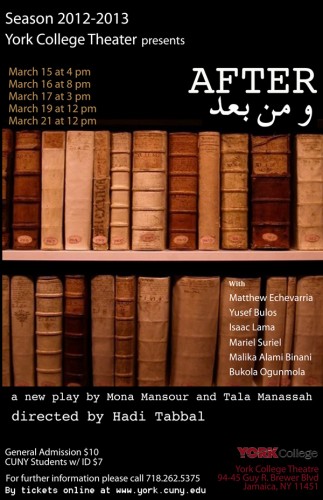 Hadi Tabbal is a well know director/actor who holds an M.F.A in acting from The New School for Drama and is a recipient of a Fulbright Award. Despite residing in New York, Hadi has shared his expertise and talent through workshops at Theater Al-Medina in Beirut in an attempt to encourage aspiring Lebanese actors.

The Plot:
Set in a family-owned bookstore in modern-day Brooklyn, AFTER follows high school student Tariq, who struggles to find his voice in his family and surrounding community. With his only friend Amelia, a dedicated activist, Tariq exploits his one superior talent that is nothing short of dangerous: hacking the internet. When his cousin Rania arrives to the United States under extremely mysterious circumstances, her presence causes a series of events that force Tariq and his family to reevaluate their fundamental questions about generational differences, discrimination, and truth. [Source]

Fairuz is a big part of this production:

JS: What kind of experience will audiences have when they come to York College to see After?

HT: A very exciting one because the show is exciting! It is colorful, it has a beautiful repertoire of music, from punk rock to Fairuz, the legendary Lebanese singer. In fact, Fairuz is a huge part of this production. She is mentioned in the play, and the music I included creates the Arab world of the play. Not to mention the emotional impact of her music. The story is exciting because it is about young adults, acted by young adults. It is dangerous and insecure and raw and wonderfully acted. Because I think audiences will identify with the story, they’ll enjoy it.