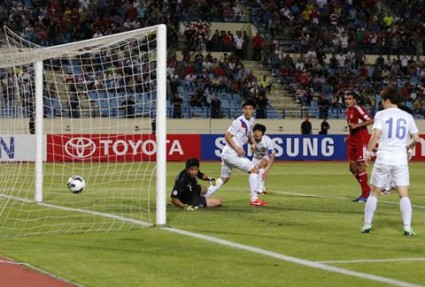 [Picture from the DailyStar]

The draw put Lebanon at the bottom of the group and ended its chances to qualify to Brazil in 2014. I honestly lost hope in Lebanon Football the second I heard about the match-fixing scandal.

I only feel bad for the few decent players, our great coach Theo Bucker and of course the fans.

South Korea scored deep into injury time to clinch a 1-1 draw against Lebanon in an Asian Group A World Cup qualifier in Beirut Tuesday, ending their hosts’ faint hopes to make it to Brazil in 2014.

A Kim Chi Woo strike from a freekick from the edge of the penalty area in the 7th minute of injury time gave the Koreans a deserved point but the Lebanese players, who had given everything and fought bravely to hold off their visitors, will feel hard done by from the referee’s decision to award a foul. [DailyStar]