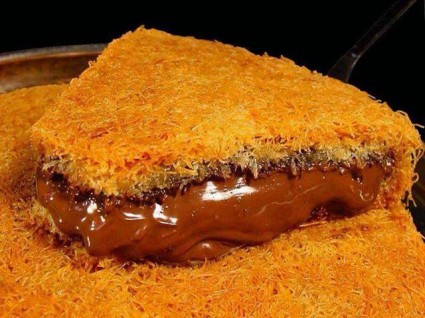 When I first saw this picture, I thought it was a really bad idea but after reading Mark’s post, I think I might give it a try. Here’s the recipe as shared by @PinkElephant73:

Let me start by saying that this recipe is not for the faint at heart – it’s basically a lot of butter, a lot of Nutella, and only some kunafa dough. But it’s freakin’ awesome.

The cast of characters! Yes, that is 400g of butter (Sorry, Mark!). You won’t be using the whole thing, I promise! But, it makes for a more flavorful kunafa! Also, a big jar of Nutella and some kunafa dough that you can find fresh or frozen from Sultan Center.

Cut the kunafa dough with a pair of kitchen scissors till you get small shreds. If you’re going to use frozen phyllo dough, be sure to thaw it a few hours before using it! It makes cutting it so much easier.

Next, pour the melted butter onto the kunafa little by little and stir it in to ensure all of the dough is evenly coated with butter. Watch out for this step! You don’t want to over-soak the kunafa with butter; otherwise you’ll get a really greasy crust, and no one likes a greasy crust.

Spoon and press the buttery dough into two 9″ round pans. In one of the pans, press some more of the dough up and around the sides of the pan to make a shallow “well” for the Nutella. Bake those babies for 30-40 minutes, checking immediately after 30 minutes to make sure they haven’t burned.
When the crusts are a deep golden brown, they’re ready! Take ‘em out and let them cool.

Then, pour the Nutella into the pan with the kunafa sides as little or as much as your heart desires. Resist the urge to lick the spoon when you’re done (I couldn’t).

Flip the other kunafa onto the Nutella-filled one. I couldn’t take a picture of this step because I was too busy trying not to royally screw it up. I would say this is the hardest part.
Then, flip the entire thing onto your serving dish and voila! Nutella Kunafa!

And Here’s the end result: 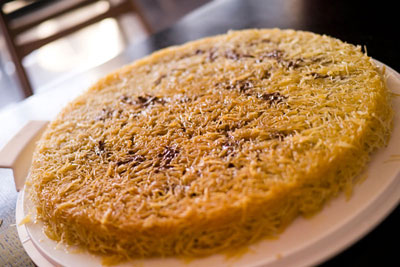