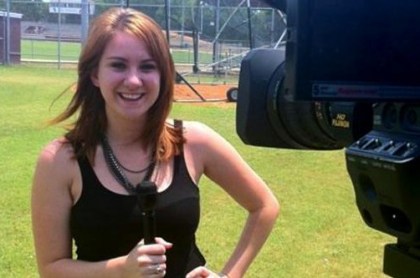 Update: As it appears, she is Palestinian and not Lebanese.

Sportswriter Jessica Ghawi just missed being shot at a Toronto mall in June. When a killer opened fire in a Colorado movie theater, she was not so lucky. Jessica was only 24. [Link]

A tragic loss for her family and friends!

Eleven other people died in the Colorado shooting that occurred when 24-year-old James Holmes burst into the movie house and began shooting patrons, allegedly killing at least 12 and injuring 70. The number of casualties makes the incident the largest mass shooting in U.S. history. [Source]

Sincere condolences to all the victims’ families and friends.

Jessica had posted on her [Blog] on the Eaton Center shooting that she had luckily survived a few weeks back. May she R.I.P.

Update: Her brother has a blog and has been blogging about the incident in details [Here]

See Also:Demonstrating against the extension of the Lebanese parliament
Posted By Najib
Categories INFORMATION,NEWS