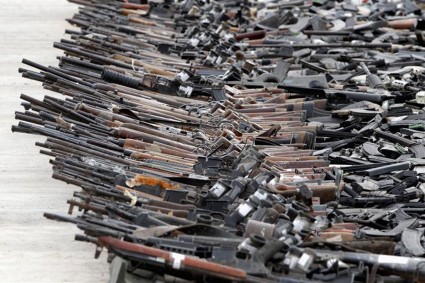 It says in the article that an unnamed member of the Lebanese government asked Ghanem for two guns. I wonder who that member might be.

Federal authorities have arrested a Virginia businessman for allegedly trying to ship dozens of weapons and high-tech devices to Lebanon, where terrorist groups such as Hezbollah operate and a civil war in neighboring Syria has sparked further violence.
Sam Rafic Ghanem, owner of an international shipping company with offices in the Washington suburbs, was arrested Saturday after an FBI sting.
The intended recipient of the weapons is not clear, but at one point Ghanem claimed he was recently asked to obtain two guns for an unnamed member of the Lebanese government, according to court documents filed in the case.
Over the past few months, Ghanem and a former employee of his company, Washington Movers International, devised a scheme to send weapons to Lebanon by hiding them inside automobile parts shipped by the company, court documents allege. [ABC]