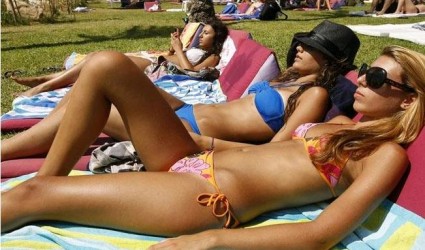 With the summer approaching, the Lebanese beaches will be filled with Lebanese girls dressed up in their bikinis.

Well guess what, all the girls are breaking the law! Yup, according to a 1941 law that is still unchanged until today, “Women are prohibited from donning a two-piece and hitting the beach.”

The punishment? a fine of 250 Lebanese-Syrian pounds, a currency that no longer exists!

Another absurd law, dating from the Ottoman rule, is using the words “insane” or “fool” for people having “Alzheimer’s”, “Parkinson’s”, or even “coma”.
Why is that so? Because those words were not yet introduced until today to the Lebanese legal system.

I should try and get the original arabic version of those laws. This is hilarious!