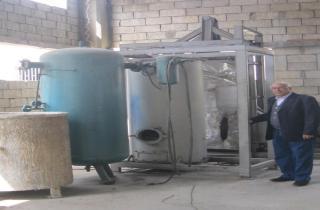 Dr. Jamil Rima is a Lebanese professor and inventor who came up with a reactor called RPC that takes any piece of garbage and turns it into carbon, which later on can be transformed into clean fuel. I heard that Rima tested out his new machine in Sassine and that it was successful but I didn’t hear much about it till Matt from NowLebanon interviewed him.

In the interview, Dr. Rima is saying he’s had serious talks with Sukleen and few ministers and that things should kick off soon.

NOW: How much does the reactor cost?

NOW: Is it safe for the environment?

Rima: It is 100 percent environmentally friendly. In our system of carbonization, you have pressure inside so you eliminate 100 percent the combustion [and the resulting pollutants]. With our system, nothing is emitted into the atmosphere.

NOW: Will you focus only on selling this reactor to private industry or will you try to sell it to the Lebanese government also to help lower the country’s fuel bill?

Rima: We are trying to install a 3.5-ton-capacity system in the south of Lebanon, for the municipality of Ain Ebel, a small village there. We will service not only Ain Ebel, but it will service 100,000 thousand people. It can treat 100 tons of trash a day. The carbon can be used in the house for heating, it can be used for barbeques. The carbon comes out of the reactor as a power, and you have to press the powder into shapes to burn it. But industries like cement can burn the carbon powder as is.

NOW: Who else are you talking to?

Rima: I had a discussion with Sukleen, maybe we can do something with them. I have some connections with Saudi Arabia, with the son of the king. I have some connections with Kuwait. I’m looking to do something, to develop. I think this technology will take off fast. I’ve had talks with the Lebanese government, but they are busy. They are interested. A lot of ministers in Lebanon called me and I discussed with them. I think we will start. Soon. I think.

I found this video back from 2012 but I am not sure if that’s the same machine Rima is talking about. It looks like it though.