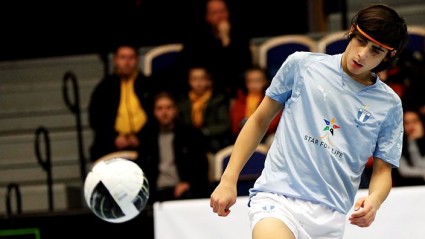 Zacharias Faour is only 15 years old and has already been dubbed as the new Zlatan Ibrahimovic. Chelsea, Real Madrid, Liverpool and Juventus were interested in him but he ended up signing with Manchester City. If you are not a Football fan and don’t know who Ibrahimovic is, he’s one of the most talented Football players in the world and some of his goals are unbelievable, specially this one against England.

According to Lebanese Blogger Figo29 who originally posted about this young talent, Zacharias Faour has Lebanese Origins (His Father is Lebanese) and can play for either Lebanon or Sweden.

ManCity ranked Faour as one of the world’s best players who were born in 1998, so let’s wish him the best of luck and hope he becomes as good or even better than Ibra.