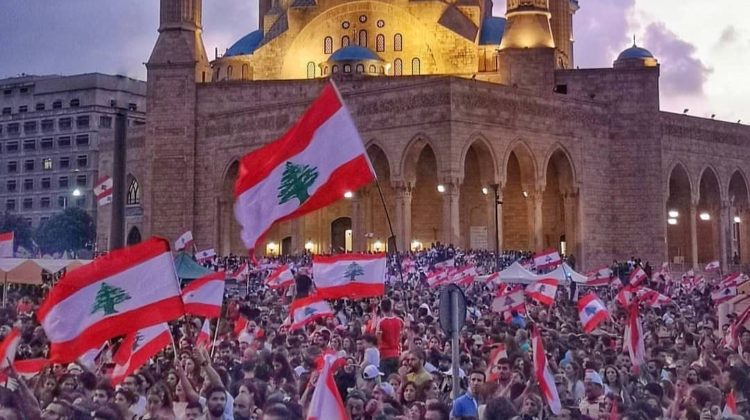 Few hours separate us from the deadline PM Saad Hariri has set for himself and his allies ever since the protests started. Whether he was hoping that protests will die out like they always do, or if he was truly sincere about his call, one thing is for sure: Lebanon is experiencing a true revolution, one that transcended the country’s traditional social divides and those in power are the ones scared shitless of what’s to come.

When your President doesn’t address his people for three days, when the head of parliament is nowhere to be seen, when the country’s most powerful parties are trying to downplay what’s happening, when propagandist TVs are not covering the protests, when some political parties are trying to ride the wave but too scared of its repercussions, when party thugs no longer dare join the protests, when there’s not a single political leader making speeches at any protest, then this means we’ve achieved the unachievable and we need to keep going strong until we take them all down.

Needless to say, every time there’s a protest, you will hear apologists trying to make the protests look bad, fabricating conspiracies and lies to downplay what’s happening, and even resort to violence to try and split the crowds. Here are some of the arguments you will be hearing or have already heard and how to address them:

We cannot let chaos prevail, asking to down the government is wrong:

How exactly is chaos worse than what we currently have? If anything, what we have at the moment is organized chaos but thirty ministers are getting paid to keep this status-quo. That said, it’s better if we have no government than the current one and let the parties scratch their heads with the President on how to come up with the next government, one that will answer to the people’s needs.

If we have early elections, people will vote again for the same people so why bother?

The same people who voted for the last parliament are the ones who went down to protest against them. Just like those Members of Parliament respected their will last year during elections, they should respect their demands now and step down until they get voted again or not (I sure hope NOT!). In both cases, it is their vote that counts, not a brainwashed party member’s idiotic opinion.

A government formed of technocrats will never work:

Did we ever try one? I cannot believe for a second that Lebanon doesn’t have 10 to 15 decent and competent individuals capable of handling this crisis properly. We’re not asking for the impossible but a strict minimum. Instead of having a chocolate expert handle Telecom, a lawyer handling our finances, an archaic doctor handling the ministry of Health and a clueless Sports Minister among others, let’s have experts in the field.

That’s utter-nonsense. How hard is it for politicians to form offshore companies? To hide the stolen billions in accounts all over the world? Fighting corruption should start by having a non-corrupt body capable of holding others accountable, not opposing parties attacking each others while stealing on the side. There’s a major trust issue with this whole political class and these laws are nothing less of a masquerade.

The Military should take over as a transition phase:

Unfortunately, this theory is shared by some government sympathizers and protesters and it’s the worst possible thing that can happen. We all love our army, but a military coup is a disaster in the making. If you’re still having doubts, look around you.

The protests are not organized and don’t have a leader. They won’t get anywhere!

Since when are impromptu protests organized? Leaders are born out of protests and we were able to stop a law in less than 12 hours on the first day alone. Add to that, politicians are under pressure to propose an interim solution and some ministers have already resigned.

We’re facing evil geniuses who will do whatever it takes to stay in power, but change has already taken place and step by step we can get there. Persistence is key and there’s no harm in being simultaneously hopeful & despairing.

All in all, tomorrow is a crucial day. Let politicians know we’re not leaving the streets and we will keep on paralyzing the country until the cabinet resigns and paves the way for another. Don’t be afraid of what comes next and remember no one ever imagined this would happen three days ago.