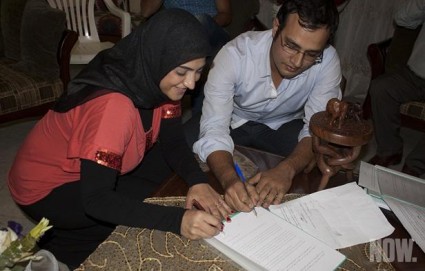 Kholoud Succariyeh and Nidal Darwish’s request for civil marriage in Lebanon was not yet approved as Interior Minister Marwan Charbel referred the request to the Justice Ministry’s advisory panel who, and I am quoting him, “did not approve on it due to the absence of a law that regulates civil marriage” [Source].

Weirdly enough though, “Justice Minister Shakib Qortbawi told An-Nahar that he was unaware of the advisory panel’s rejection of the civil marriage request” [NowLebanon].

I don’t know who’s telling the truth, but I think the President of the Republic Michel Sleiman should intervene and pressure Marwan Charbel to approve the request since he publicly expressed his support for legalizing civil marriage yesterday via Twitter.

For those who missed it, here are the steps Kholoud & Nidal took to attempt and register the first civil marriage in Lebanon. [Link]