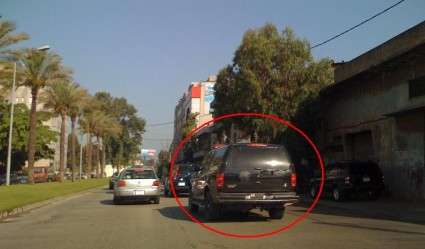 Dear Mr.Baroud,
I strongly believe you are one of the very few competent and uncorruptable ministers Lebanon has had over the past 20 years. I admire your achievements specially throughout organizing the elections and force myself and others to abide by the law everywhere they go.

A week ago, the ministry of interior announced that traffic signs will be increased by 300%. This is great news indeed, however the approach to implementing such road regulations has never been fruitful nor satisfying either for the ministry or for the drivers.

Why is that so?
The picture shown above depicts a car belonging to the ISF driving on the maritime road to Beirut early in the morning. If i was a police officer operating on that road, i would have issued not less than 10 violations for the driver among which:
– Running a red light.
– Taking the right-of-way when it belonged to another driver.
– Changing lanes without using the turn indicator.
– Driving recklessly and dangerously.
– Not wearing the seatbelt.
– Excessive Speeding.

Having said all that, i strongly suggest that you start raising awareness among police officers on driving carefully and setting examples for Lebanese drivers to follow. Also, i wish that the laws apply to them first and that they be punished for such irresponsible behavior before sending them out to collect money from people for going 50 kph on a 30 kph road.

Thank you and best regards.