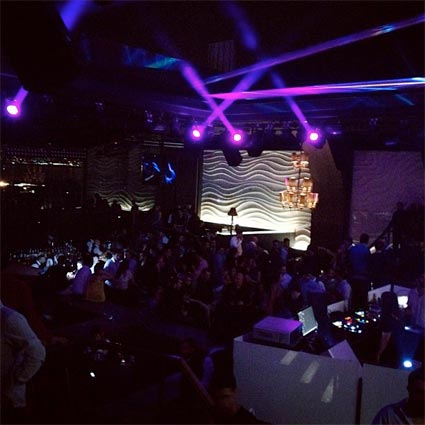 When I was in Lebanon over the weekend I tried to book a table at MAD but it was fully packed so we ended up going to Life instead. When we first got there the music wasn’t so bad but that’s probably the only good thing I have to say about the place.

Firstly the majority of the people there were either men and women aged 40 and up or really old men in their 60’s and 70’s with young bimbos or Eastern Europeans. The style of people kinda reminded me of Medusa in Jounieh. If you’ve never been to Medusa by the way that’s a good thing so don’t worry about it.

The music also went downhill or maybe I’m just old and lame but the kinda music they started playing would make even Skybar’s seem better. There was a “show” around 1AM where they two girls got up on the cat walk to dance. It was girl on girl action and it lasted for maybe one full song or two and then it was over and they were gone. Too short of a show and there should have been more girls (preferably also stripping).

Then there were a bunch of little things that stuck out as well. I thought the place looked a lot better when it was dimly lit (like in the photo above) but most of the time they had bright lights flashing and so the general ambiance was too bright and it looked tacky. When the girls were dancing they had these bright lights on behind them which brought to notice a huge dirty smear all over the glass window behind the girls. It was so distracting that I was noticing the glass more than the girls! Out table was up on a balcony and there was a horrible make shift bar underneath us. It looked like it was built after the place was finished and it looked cheap, old, broken and dirty. It really wasn’t a pleasant sight to see. The waiters also dressed like those in Lebanese restaurants (black pants, white shirt and black vests) which isn’t very cool. When we ordered a bottle of whiskey they brought us 18 years instead of the regular 12. When we ordered a bottle of vodka they got us the larger 1L bottle instead of the regular .75L. Doesn’t sound like a big issue but it felt like they were trying to get all these extra charges off us whenever they could.

On the other hand their roof is actually pretty cool. It’s similar to BO18 and opens up and closes so it’s an outdoor and indoor place at the same time. Their sound system was also pretty good with a lot of deep bass but if they only used it to play some decent music…

Anyway you can check out the place for yourself, they’re located behind BO18 right next to Sleep Comfort.