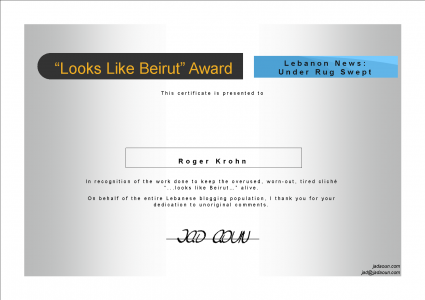 Beirut has been a byword for chaos, war and destruction since the civil war [BBC]. However the Lebanese blogger Jad through his blog is on a mission to change that and is sending out “Looks like Beirut” certificates hoping people will stop using it.

I thought at first it was a one time thing but Jad’s been doing it consistently and is even getting responses from the people receiving their certificates. Last one to reply was Monona County Sheriffâ€™s Deputy Roger Krohn who promised not to use this cliche anymore and nailed it on his wall as a reminder. [Link]

Great job Jad and it’s quite astonishing that after 20 years since the war has ended people still think of Beirut in terms of ruins and ashes while it’s a beautiful city.