I feel i need to tell a small story to introduce Chahe better.

Chahe decided to ride his Syrian Concierge’s mobilette almost two weeks ago in their building’s backyard. 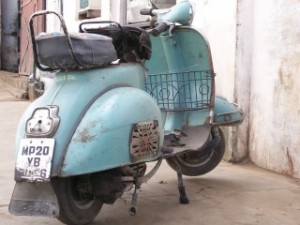 Chahe was driving recklessly and ended up crashing his mobilette at full speed (15km/h) into the pole. He jumped before he hit the pole but bruised his leg severly ( He was rushed to the hospital and had 7 stitches).

The funniest part is that his sister was filming him, (don’t get too excited here!), but it turns out she forgot to turn the “Rec” button on 🙂

I tried to sketch below the path Chahe took that led to his crash. 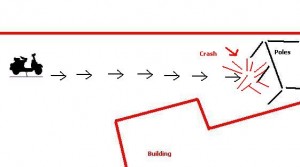