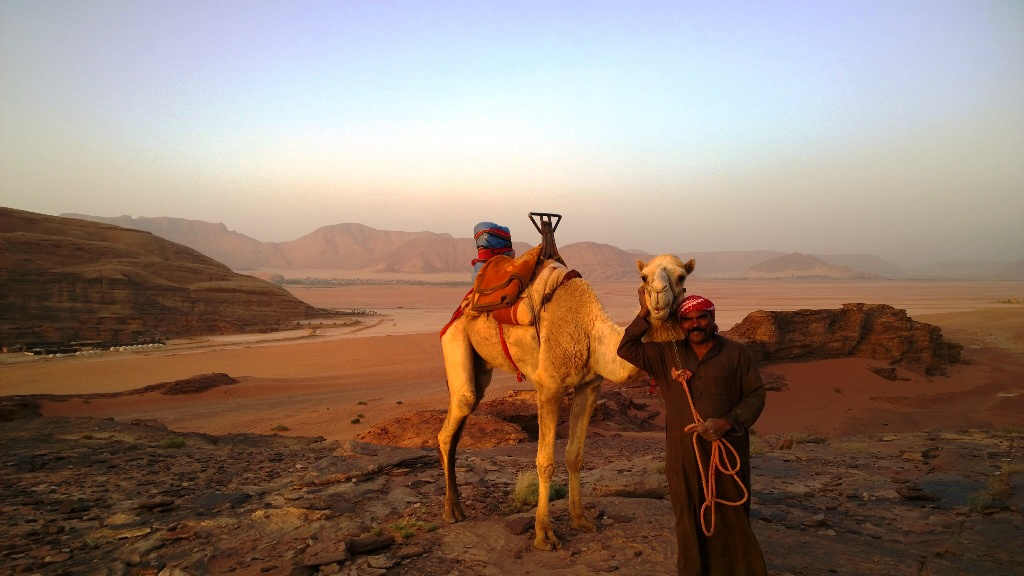 In case you’ve missed Part1 of my trip to Jordan, you can check it out [here]. I’ve shared in it my experience at the dead sea, at the Baptism site (Al Maghtass) and Ma’In resort. The second part of our trip was the most interesting one as I got to experience Petra by day and by night, spend a whole afternoon in the desert, watch the sunset at Wadi Rum before heading to Aqaba. 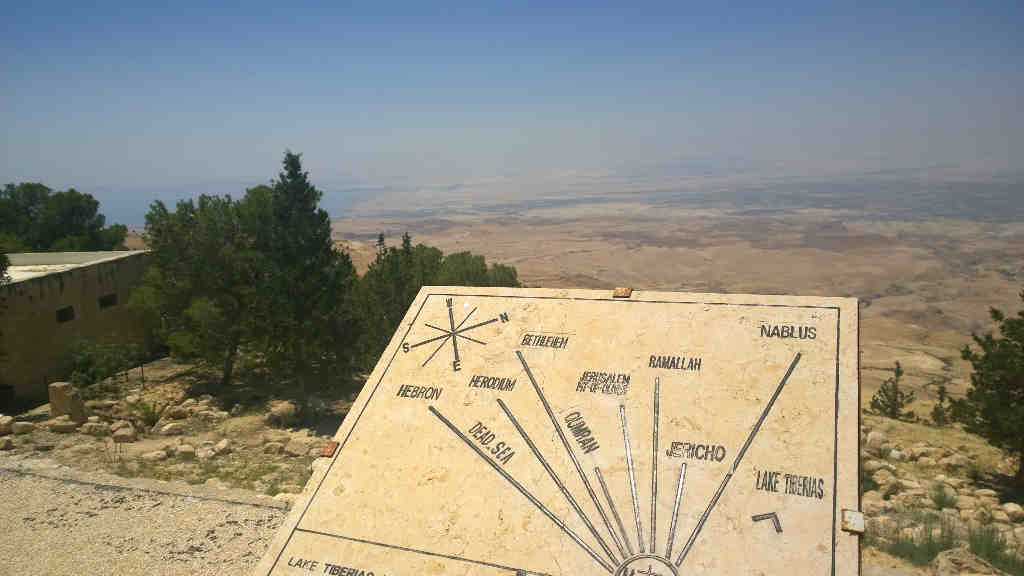 Our first stop after Ma’In was at Madaba where Mount Nebo is. This is where Moses as mentioned in the Bible was granted a view of the Promised land that he would never enter. The view is breathtaking from the top next to The Brazen Serpent and if the weather is clear, you could spot Jerusalem and Al-Aqsa Mosque. There’s also a nice little museum that is worth passing by.

Mosaics Shop and Lunch In The City 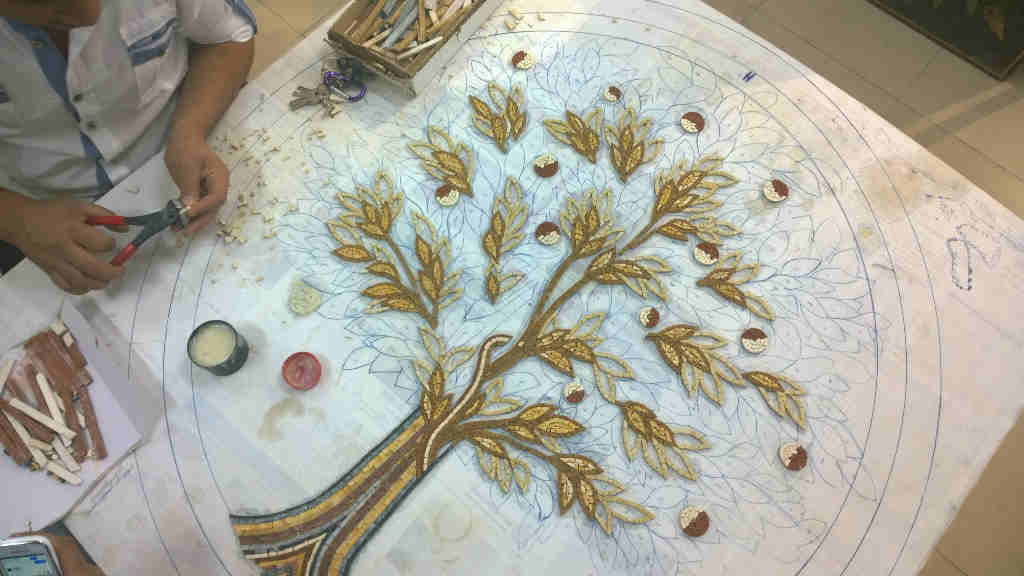 There’s a cool shop right before Mount Nebo that makes and sells mosaics. It’s a huge place where we got to see how mosaics are done (the traditional and modern way) and we had some time to shop for some souvenirs as well. Afterwards, we headed to the city to eat at an old authentic restaurant. Most of the restaurants in Jordan we visited were clean and served good food. However, the dishes were not that different from what we have in Lebanon except for the Mansaf and the Zarb (which I will talk about later on in this post). 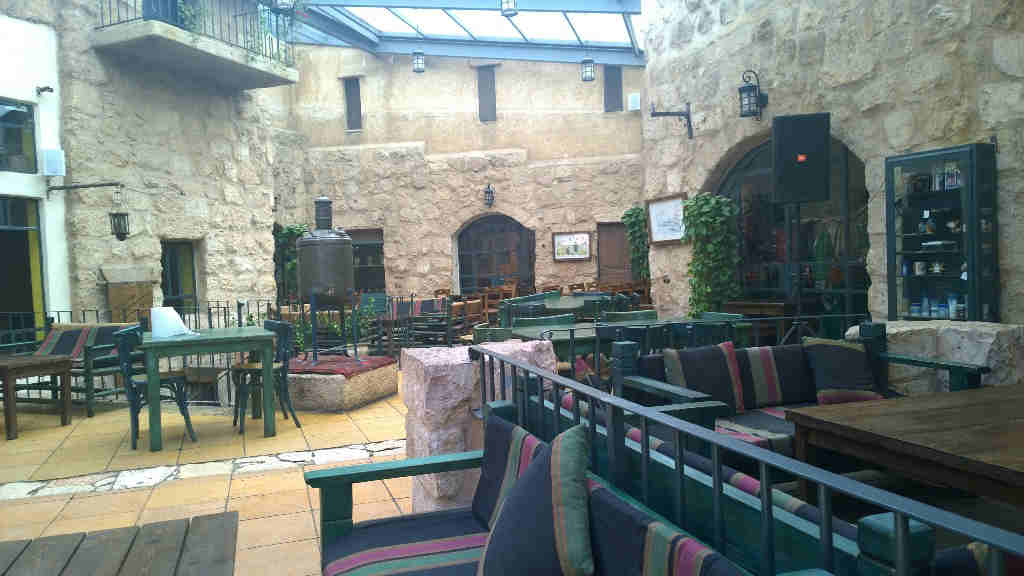 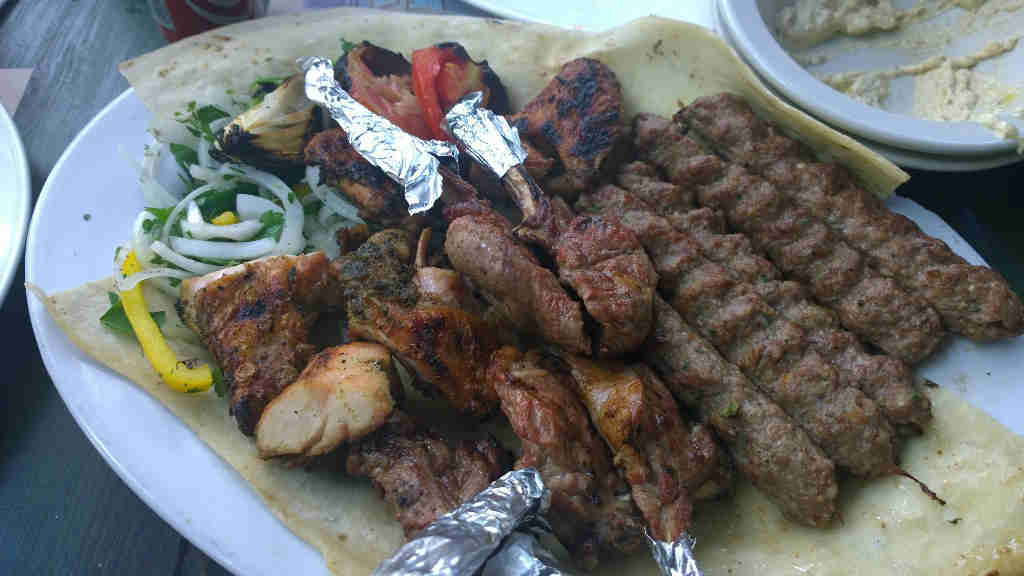 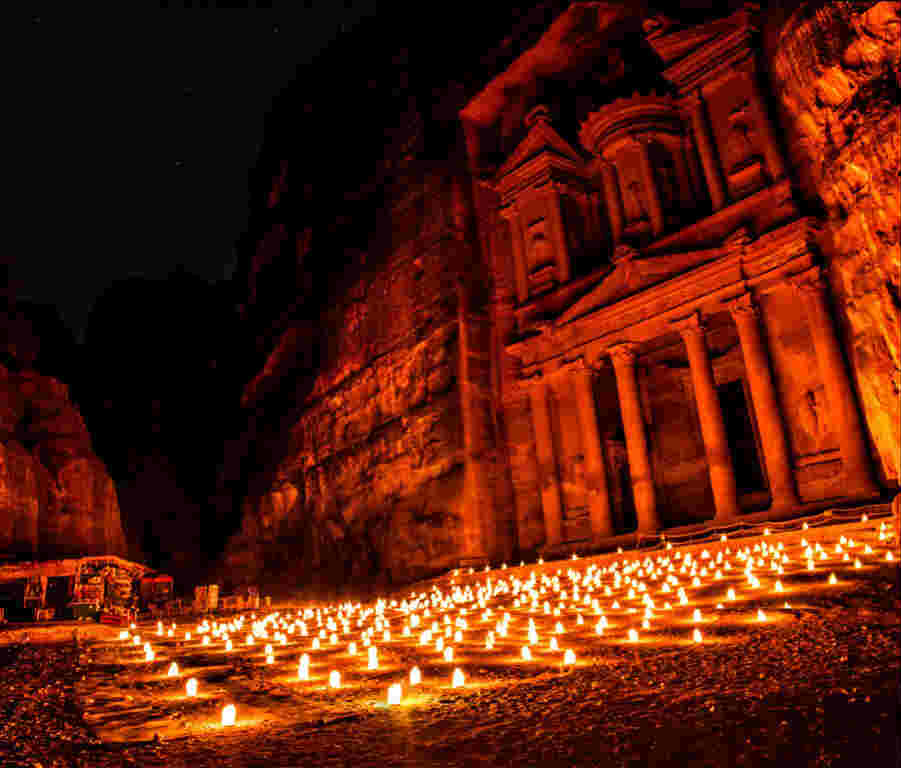 The trip from Madaba to Petra was a very long and tiring one. It’s a 4 hours trip on a desert road and there aren’t any interesting landscapes to look at along the way. Once we got to Petra and after dinner, we headed to visit Al Khazneh in Wadi Musa. It was around 9pm when we started walking down a valley surrounded by mountains with nothing by candles on the sandy and rocky road to show us the way. I’ve never tried anything like that in my life and it was quite exciting to be honest. Once we got to the Khazneh, the atmosphere was both magical and mystical as hundreds of people were listening to two artists playing medieval flute music while the Khazneh was lit up by candles all around it.

I was really blown away by this experience and I would go to Jordan just to experience it again. The only inconvenience is that it is impossible to take decent pictures (unless you wish to carry your SLR all the way down) as it’s too dark. You can find below a couple of shots I managed to take after several tries with my Lumia 1020. 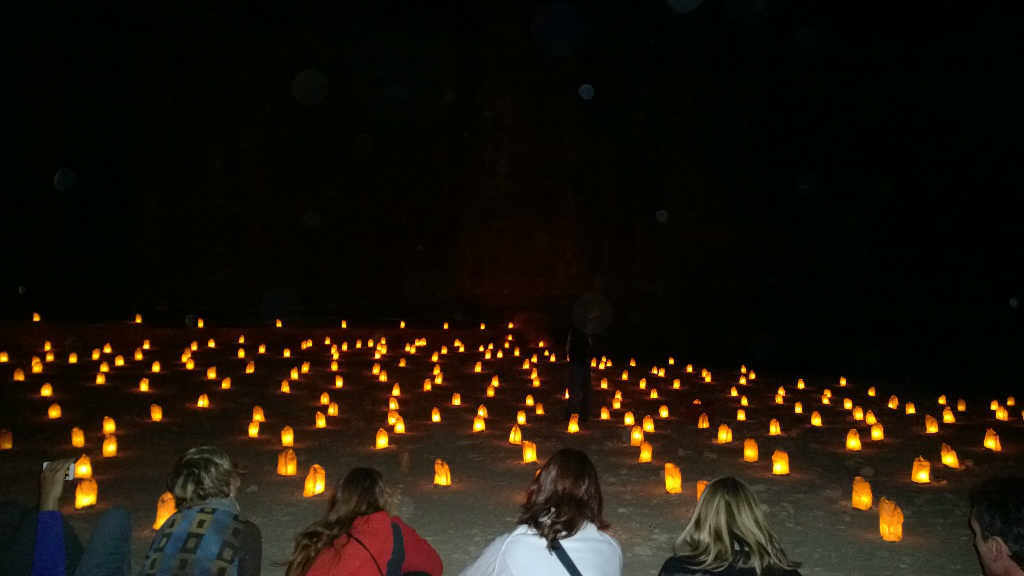 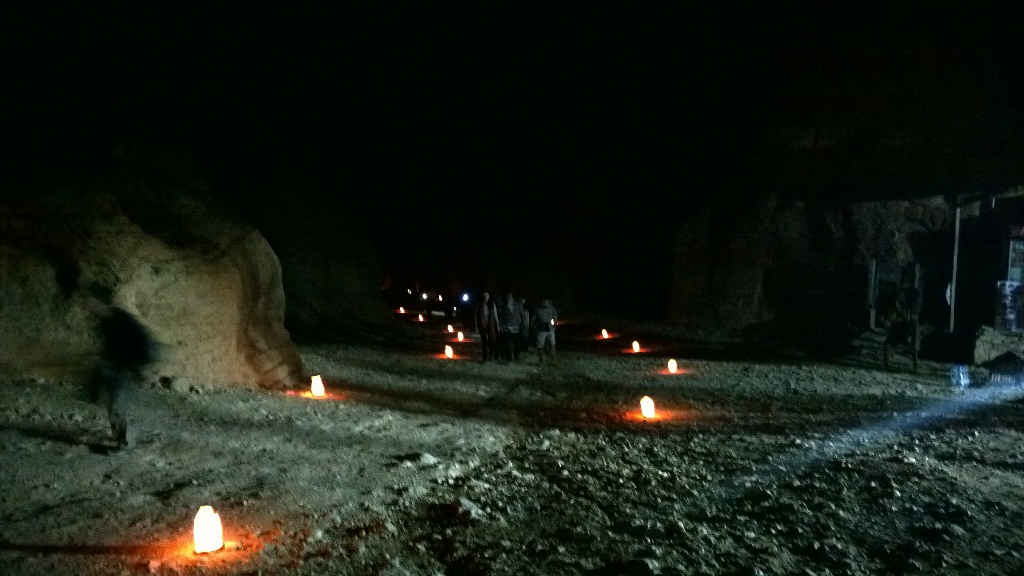 Taybet Zaman and Petra By Day 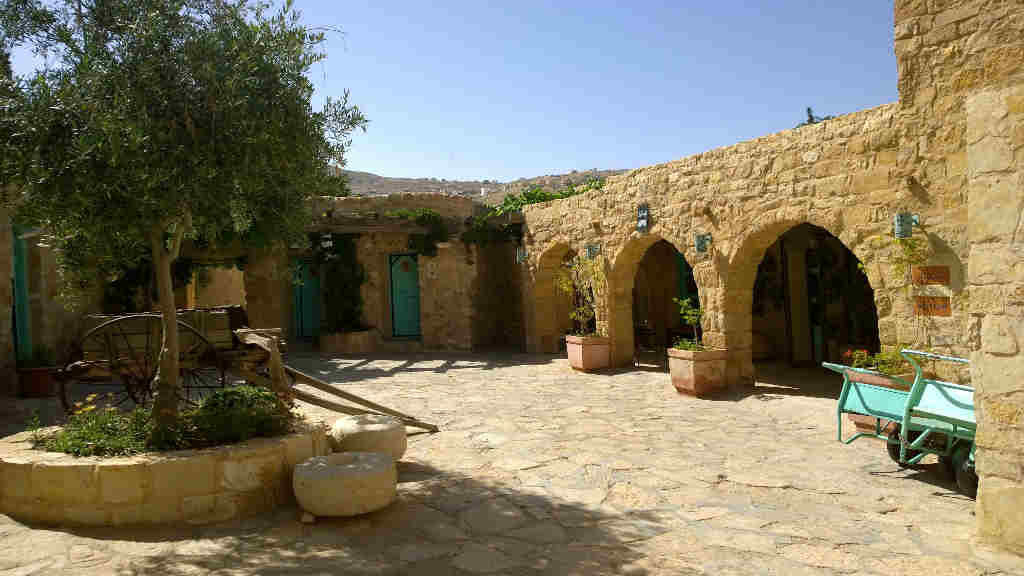 We were staying at Taybet Zaman during our Petra visit, which is an old abandoned village that was transformed into a really cool resort. As you can see from the pictures, the place is really nice and set in a very peaceful surrounding. Breakfast wasn’t that great though. 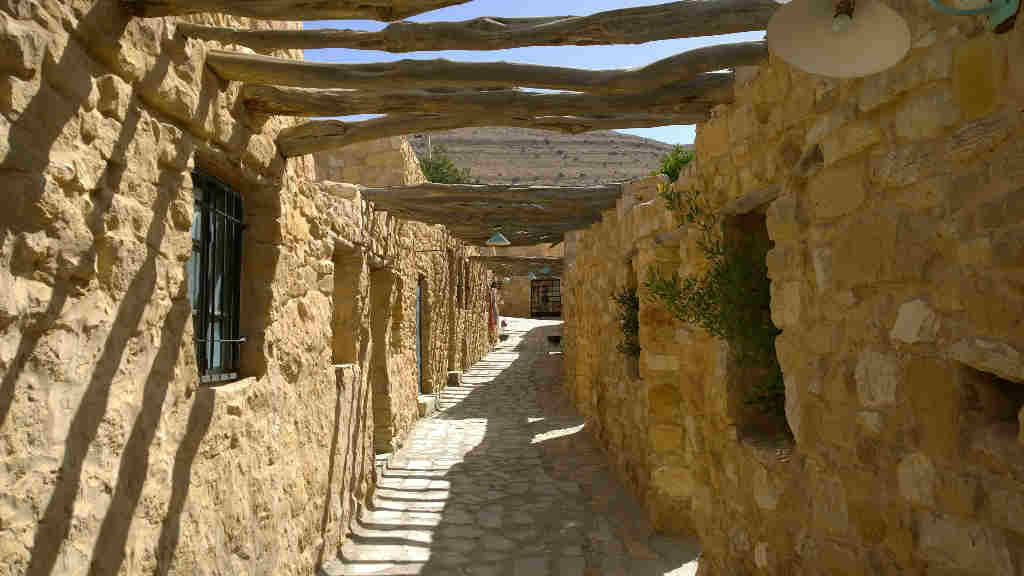 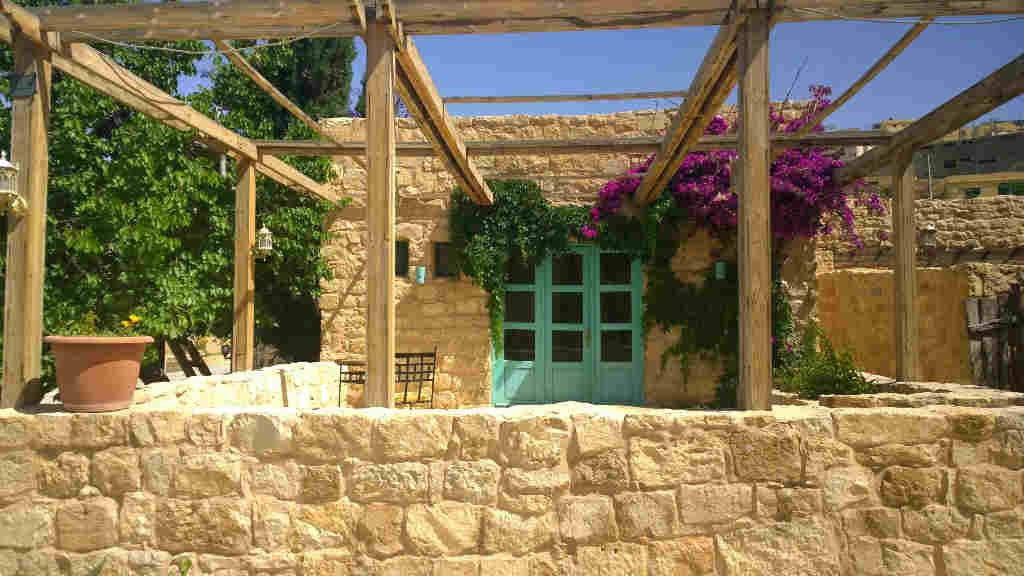 After experiencing Petra by night, we headed again in the morning to walk down Wadi Musa (Petra) and see the Khazneh temple that was used by the way in one of Indiana Jones’ movies (Indiana Jones and the Last Crusade). The day experience is very different from the night one as you get to see what’s around you and you can go on a horse ride instead of walking. Personally speaking, I preferred the night experience as the horses are quite annoying and there are a lot of smells and horse poop on the way. 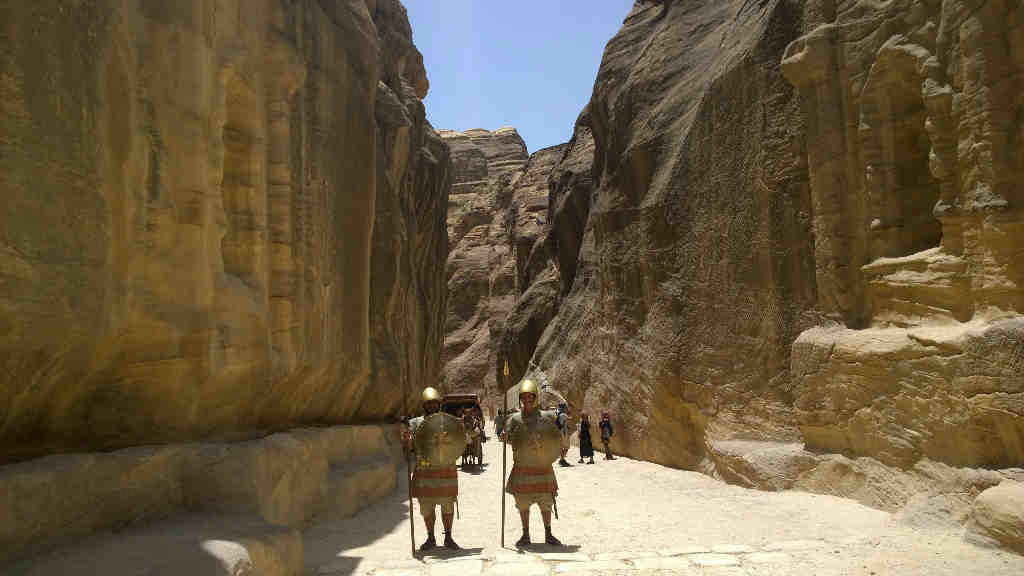 We took the short walk to Khazneh only as it was really hot. However, if you happen to visit Petra, go as early as possible or in the afternoon and try visit all the sites there. Keep a large bottle of water with you though as the walk is long and there aren’t many shops on the way. 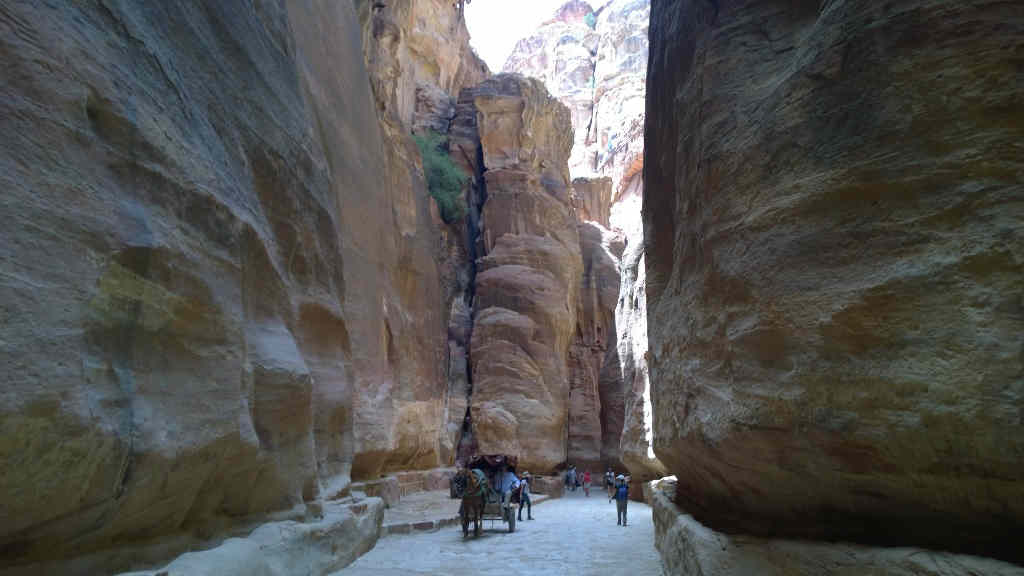 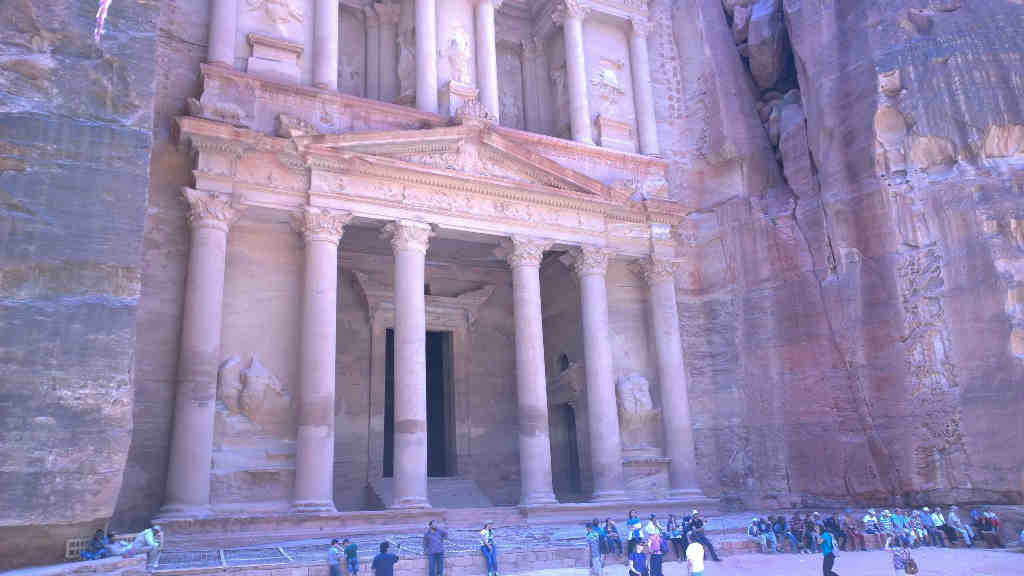 Wadi Rum and the Desert Experience 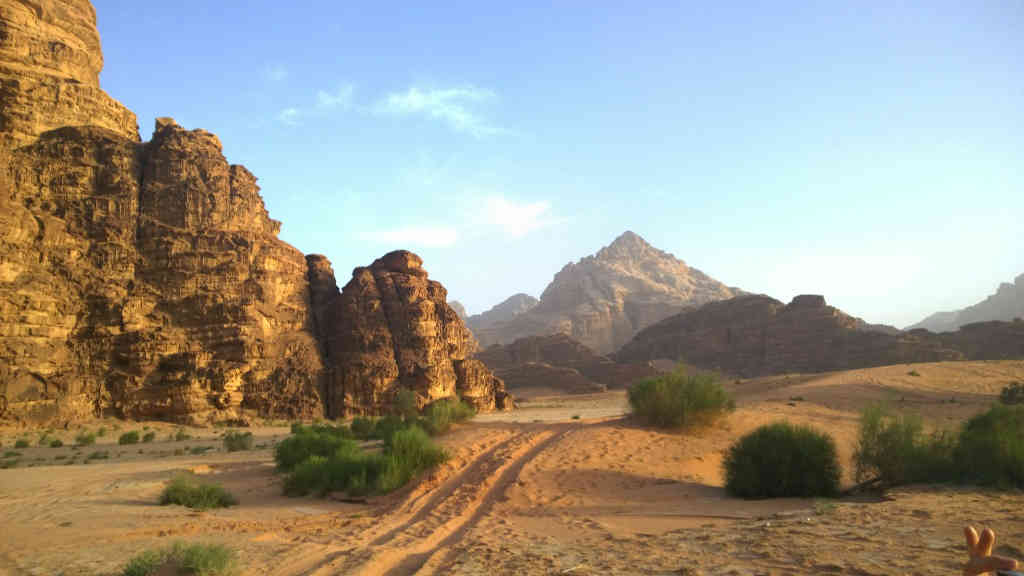 After Petra, we headed straight to the Captain’s camp in Wadi Rum in the middle of the desert. It was my first time in the desert and I loved everything about this experience. The camp was really cool and clean, the people were very friendly and the food we had at night was superb, specially the main dish which was the Zarb.

I was expecting to go on a safari trip there but instead we just went on a jeep tour and explored Wadi Rum. We then parked at a strategic point to watch the sunset which was quite spectacular! Our driver showed us as well an old deserted camp where one of the scenes from Lawrence of Arabia was shot. 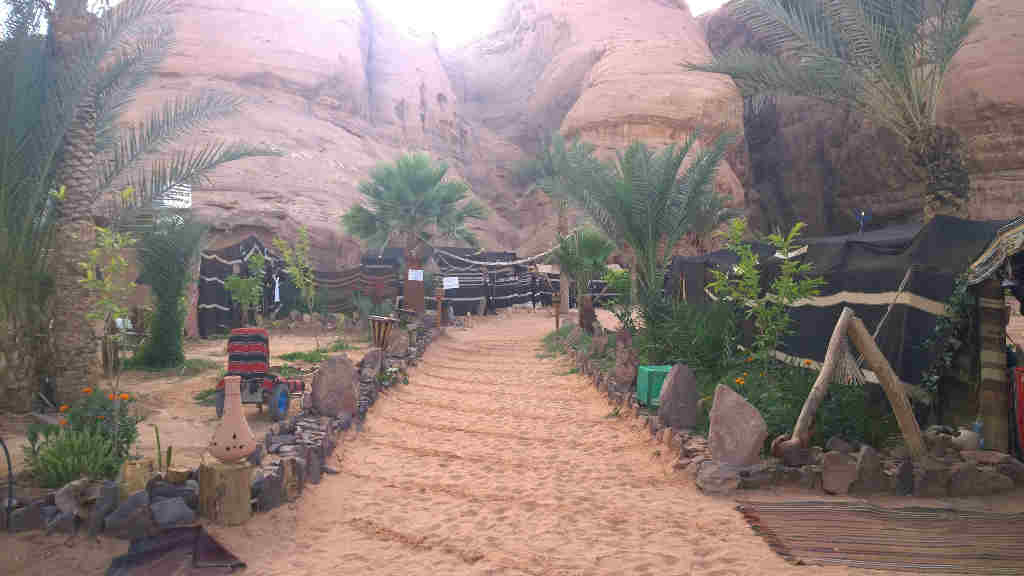 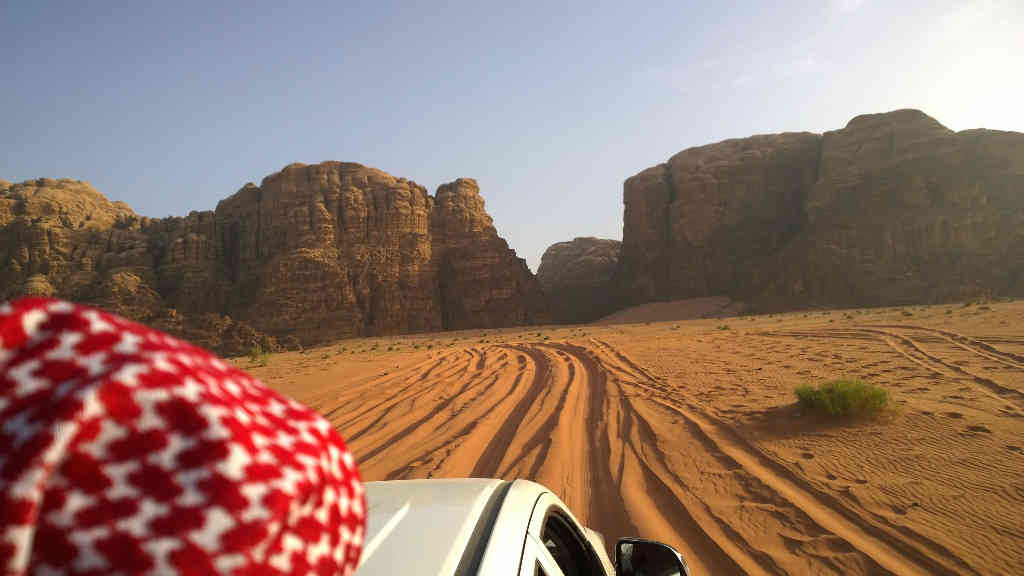 Once we got back to the camp, the Zarb dish was almost done and the buffet was almost ready. In case you haven’t heard of the Zarb before, it’s basically a bedouin barbecue where meat, chicken and vegetables are all put in a large underground oven, then buried properly and cooked for few hours. The chicken is put on top, then below it the vegetables and finally the rice. As weird as it may seem, the outcome was surprisingly delicious. While dinner was being served, some of us smoked Arguileh while watching traditional music and dancers perform.

I was very tempted to spend the night at the camp as they had small rooms you could sleep in, but we had to leave to Aqaba. This being said, I highly recommend you give Wadi Rum a try and go to one of the bedouin camps set there. It’s quite the experience and you won’t regret it! 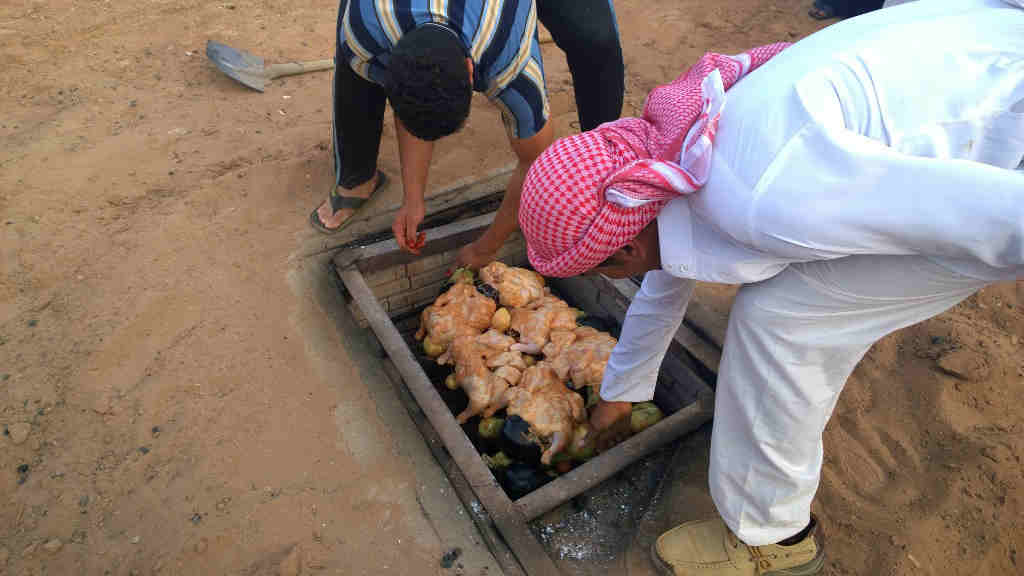 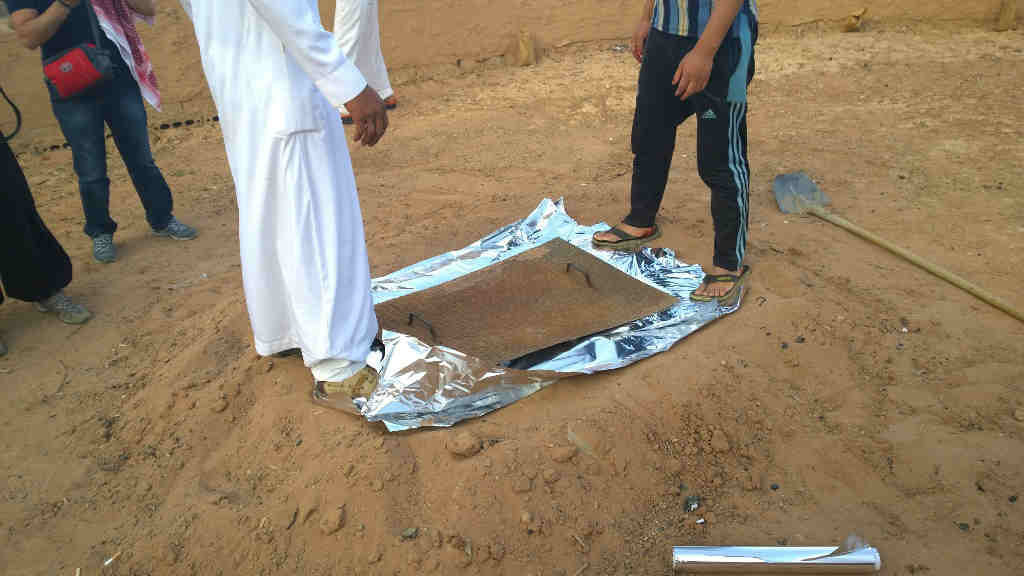 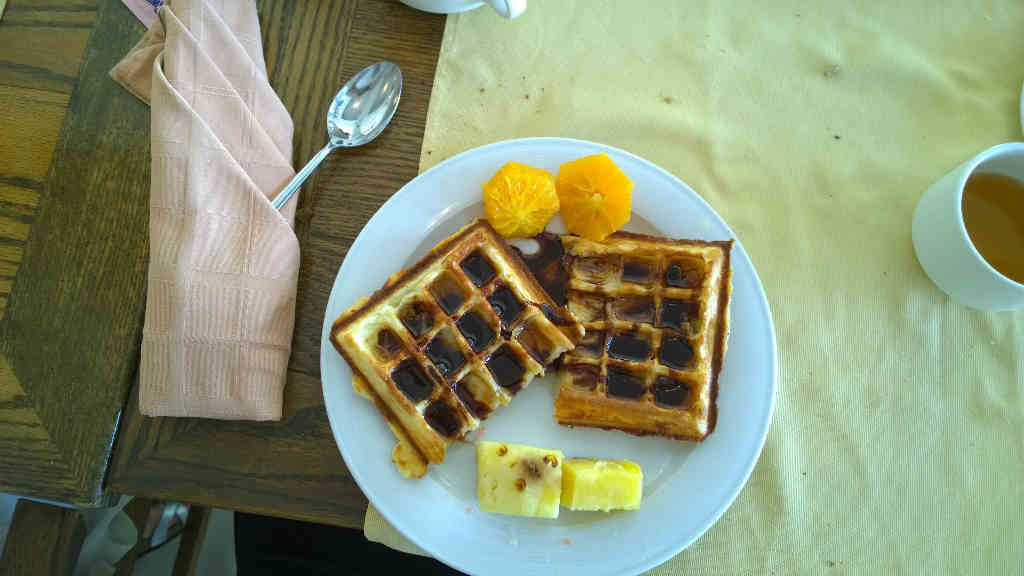 Our last stop was in Aqaba, which is a city located on the Red Sea and is one of the major tourist attractions in Jordan. Aqaba is well known for its rich marine life, its beach resorts and luxury hotels as well as for being a destination for all sorts of water sports. We were staying at the Radisson Blu in Tala Bay which is a beautiful resort but a bit far from the city center.

Even though the resort was amazing, it was way too hot to even walk outside or walk on the sand. I looked a bit online and May is definitely not a good time to be visiting Aqaba so maybe it was a bad idea to spend the last two days there. Nevertheless, I enjoyed walking around the resort a lot and even paid the spa a visit. 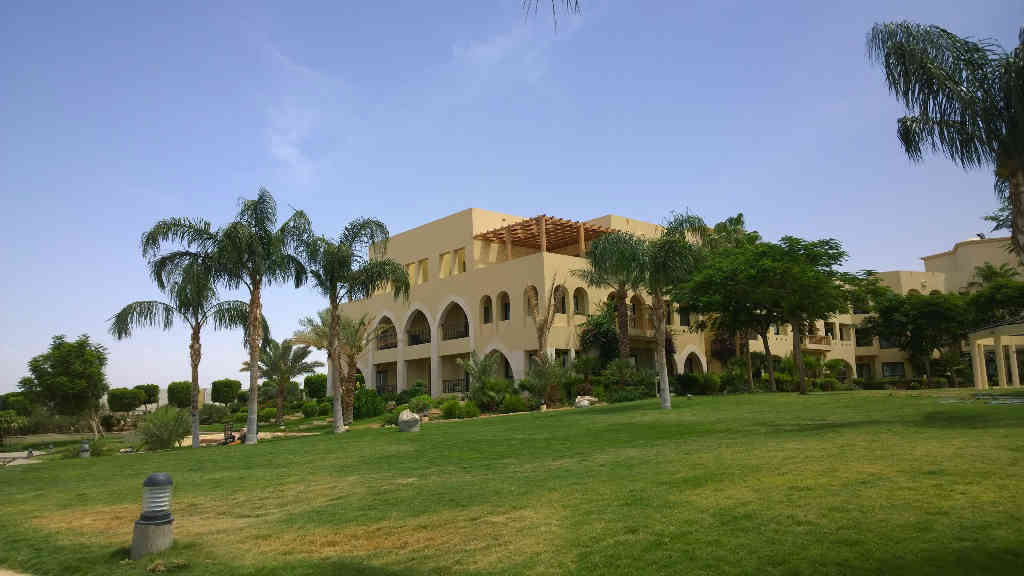 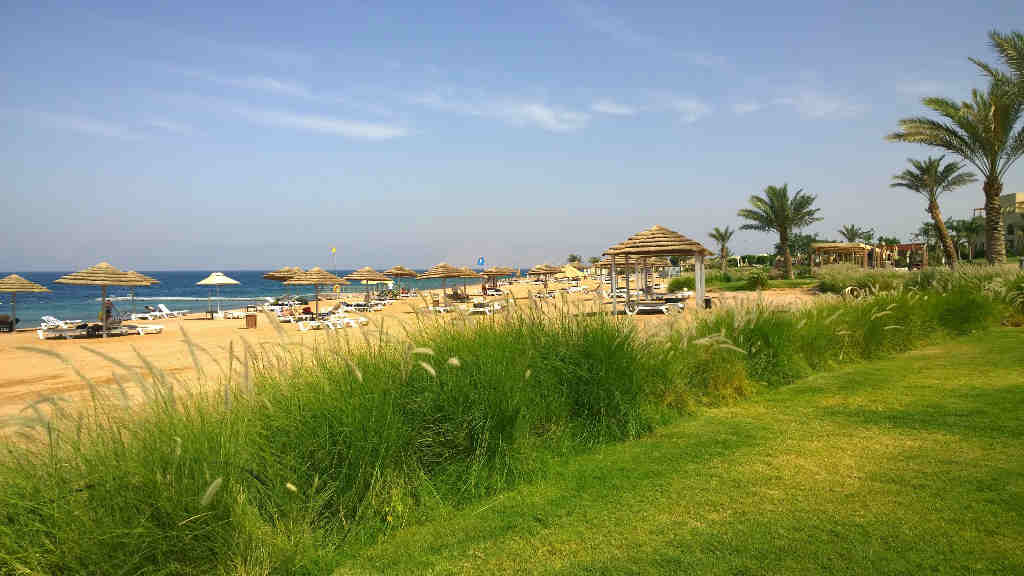 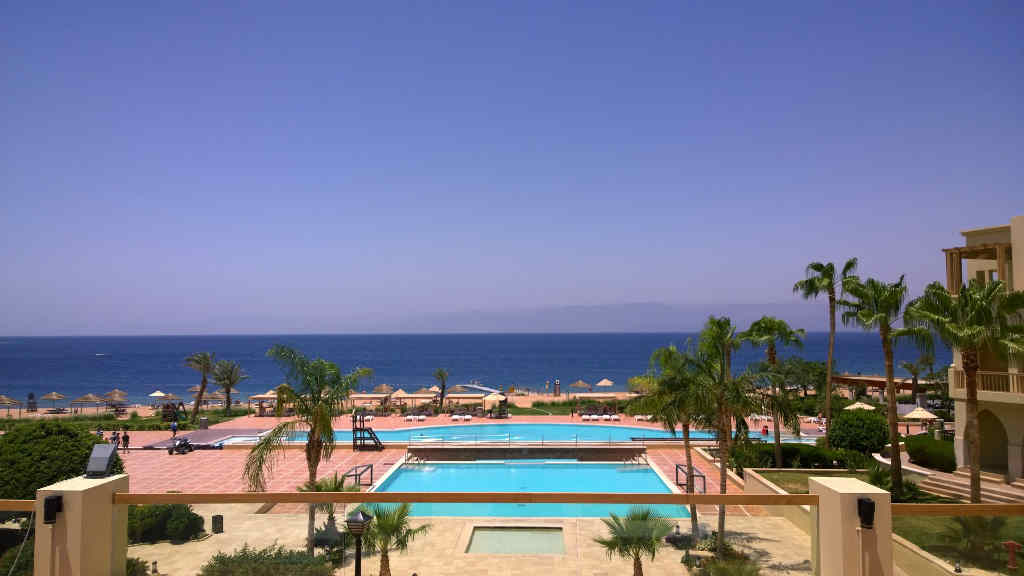 Should You Visit Jordan? 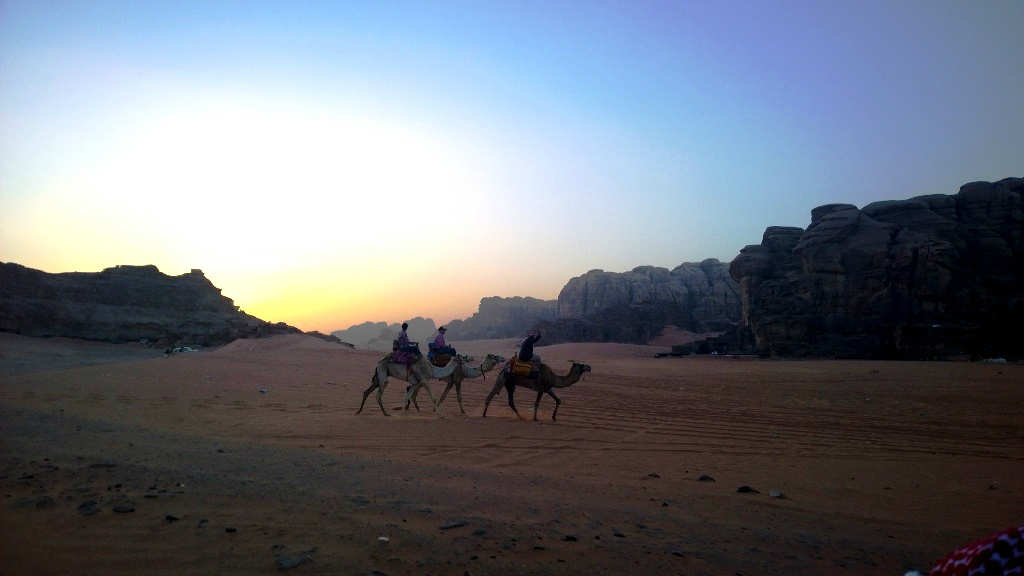 There are so many things to see and do in Jordan that I wish the trip lasted a bit longer. From the dead sea to Ma’In, then Petra and Wadi Rum, everything was great and all of us were having a lot of fun. The long distances were a bit tiring specially that we were in a small van, and the schedule was a bit squeezed mainly due to the Pope’s visit but otherwise it was a wonderful trip. However, I think we should have skipped Aqaba and enjoyed the desert a bit longer. In all cases, I am definitely visiting Jordan once again as I didn’t have time to explore Amman and I want to stay a whole weekend in the desert.

On a last note, I highly recommend that you pay Jordan a visit if you haven’t been there yet as there are a lot of exciting stuff to do and wonderful sites to visit.