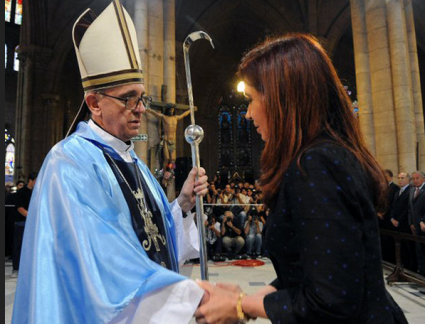 I heard on TV and read on a couple of sites that the newly elected pope Jorge Mario Bergoglio (Francis I) has a picture of Saint Charbel in his office and admires the Lebanese Saint. I am not sure if it’s true but I wouldn’t be surprised as St. Charbel’s life is an inspiration to many Lebanese and Christians from all around the world.

Jorge Mario Bergoglio was named the 266th pope, succeeding Benedict XVI as leader of the world’s 1.2 billion Roman Catholics. Bergoglio, 76, of Argentina, was elected by his fellow cardinals in their fifth round of voting, securing a two-thirds majority just 24 hours after their conclave began in the magnificent precincts of the Sistine Chapel. He took the papal name Francis. [Source]

You can read more about the new pope [Here].