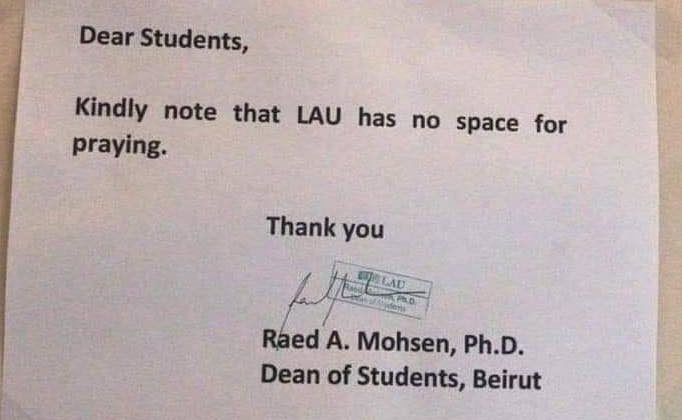 So someone took a paper placed by the LAU Beirut Dean of Students inside the library and shared it online to bash the Lebanese American University and claim that they do not respect people’s beliefs and don’t allow students to pray on campus. To begin with, the statement issued by the Dean of Students clearly indicates that there are no designated places for prayer on campus, and not that students cannot pray there, and I’m pretty sure there’s a good reason behind it.

Moreover, the dean issued another statement clarifying that matter and explaining that LAU took a decision, like many others in the regions, not to to provide a designated place for prayer as their concerns were that political and sectarian and religious issues might affect such a space. Also, they stated that further consultations will take place with the administration and the student council. 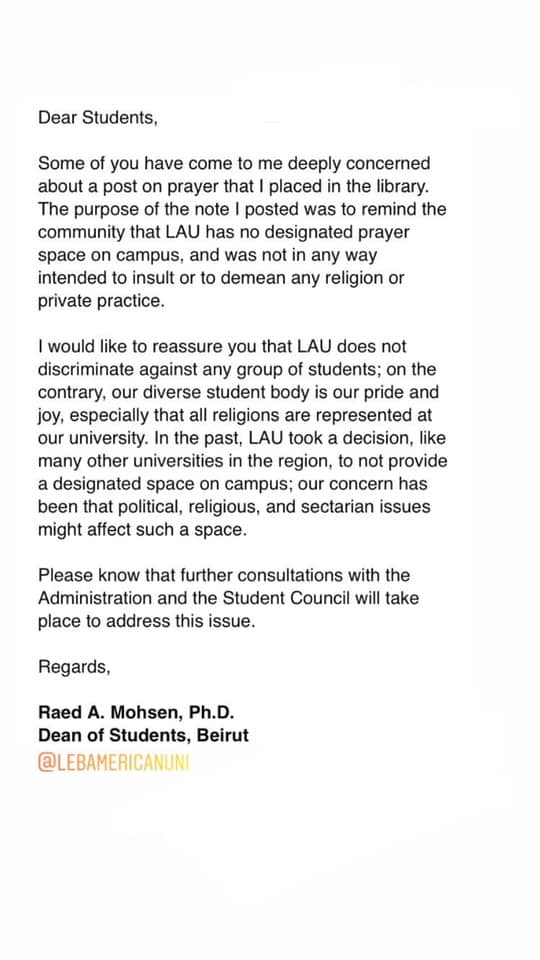 Now while some may argue that universities should provide a space for prayer to its students, I find it ridiculous that some are making such a big deal out of this matter when there are tens of mosques and churches around LAU’s Beirut campus. Why do you need a prayer space in the library when there are religious spots literally right across the street? Why are you attacking LAU for not providing you for a prayer space? Are you there to get some education or practice your religious beliefs?

And let’s assume your argument is that the university should respect people’s beliefs and act accordingly. Do we live in a society where political parties are not involved in student elections and students’ lives? Is LAU or any other university capable of controlling religious & sectarian tensions among its students? What is LAU’s priority? providing better education to their students or figuring out how to suit all the parties’ religious demands? Those claiming that no parties will try to exploit such a space are clearly naive. I’ve seen religious and non-religious groups fight over a bench just to make a point.

Also and from a logistics perspective, what if one prayer space is not enough? What if students from different religious start asking for more spaces? What if LAU established a multi-faith space? Who will make sure all factions are satisfied? And who’s going to manage it?

All in all, I’ve spent years at AUB and LAU and my biggest concerns were getting decent grades and finishing my projects and papers on time. It’s always healthy to open a debate on offering prayer rooms on campus but my conviction is that universities should be secular institutions that do not promote or encourage any religion and focus on offering higher education to their students. I’d personally rather have more space in the library or in the computer room than restrict the space to come up with a prayer room.